English Teacher’s latest track, 'R&B’, fuses several of the band’s musical influences to create a dynamic and driving sonic experience. From raw, distorted guitar and bass reminiscent of Sonic Youth and Slint, to white-knuckle drums and assertive vocals not too dissimilar to those of punk purveyors Shame, ‘R&B’ is a cocktail of sound showcasing English Teacher’s versatility and creativity.

Having first met whilst studying in Leeds and remained in the city harnessing their craft and recording demos ever since, the four-piece, marshalled by enigmatic frontwoman Lily Fontaine (also part of Yorkshire risers Eades), have sought inspiration from social issues, literature and wit for their brand new material, whilst also benefiting from previously working alongside legendary producer/engineer Ken Scott (The Beatles, David Bowie, Elton John).

With supports already clocked up alongside the likes of Yellow Days, Lala Lala, and No Vacation, as well as early headline shows of their own in Leeds and Manchester, English Teacher are primed to carve their spot in the emerging indie landscape.

Discussing the origins of their new release, the group revealed: “‘R&B’ is about the cyclical, productivity-diminishing paradox of low self-esteem and imposter syndrome-induced writer’s block that then fuels low self-esteem and imposter syndrome. It’s also about racial identity and putting the love that you have to offer a potential romantic partner back into yourself”. 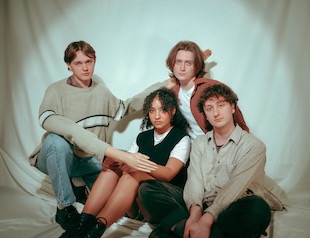