Lit is considered one of the preeminent bands to have come out of the post-grunge era of the late 90's and helped define an entire generation of SoCal power punk with hard-charging hits like 'My Own Worst Enemy,' 'Miserable,' 'Zip-Lock,' and 'Lipstick & Bruises.' The band has released 6 worldwide studio albums, including their RIAA Certified Platinum 'A Place in the Sun', and they are currently writing and recording to release new material.

The band has remained one of the most active bands from that era and still consists of three original and primary members including brothers A. Jay (lead vocals) and Jeremy Popoff (lead guitar), and Kevin Baldes (bass). Their mega-hit 'My Own Worst Enemy' is one of the most broadcasted, covered, karaoke'd, recognizable rock hits of the last 20 years and won them a Billboard Music Award for 'Modern Rock Song of the Year'. Their unforgettable video for 'Miserable' featuring Pamela Anderson was one of the top 10 most played songs of 2000. As recently as 2017 Lit found themselves back on the charts hitting #1 on the CMT 12-Pack with their video for 'Fast', from their 'These Are the Days' album.

Lit continues to actively tour their "high-octane performances that have thrilled millions of fans across the world." (Center Stage Magazine).
"The common thread that never changes with Lit is that you can tell the Popoff brothers are in the mix," Jeremy says with pride. "I'm still playing a Fender Telecaster or a Gibson Les Paul down to my knees, through a Marshall amp with an overdrive stomp box pedal, and A. Jay still sounds like A. Jay."

Their new music promises to deliver the catchy singable Lit rockers they have become known for, all while evolving with their lifelong fans. "We still know how to have a good time," A. Jay says. "We still party together and maybe get into a Little trouble here and there. But we also have other things that play into our songs now, like marriage, divorce, kids who are growing up and parents who aren't getting any younger.
We're evolving as people and learning." 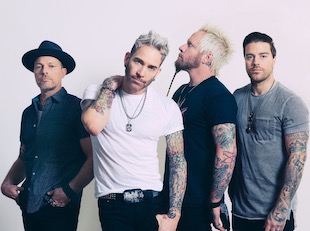