Gen-Z's next music icon is a Manila-born polymath with hair that cycles through kaleidoscopic shades - and he's about to hotwire today's pop landscape with his poignantly personal, genre-splicing songs. "I'm an outsider of pop music, I kind of like it," he grins (today, his hair is Yorkie-bar blue). How big does he want to be? He smiles, before fixing me in the eye. "The aim is Beyoncé."

He may not be headlining Coachella yet, but No Rome's stunning, self-produced new EP 'Crying In The Prettiest Places' unambiguously puts him on a path to get there. While Rome's critically-lauded debut EP 'RIP Indo Hisashi' announced his ear for melancholic synth elysium, the new project captures his eccentric sonic sorcery with breathtaking cohesion. "'RIP Indo Hisashi' was very synthetic, ultra-modern pop music," he reflects. "But the new one is me unveiling all the stuff that I can do as well."

There's a remarkable lightness of touch to Rome's production; don't be surprised if 'Pink' makes you want to sack off work and skip through a field somewhere. But the pillowy textures are laced with a more mournful introspection - the earworm hook, "I'm been thinking all about your body," is both lonely and libidinous - a consequence of Rome writing the track in the raw aftermath of a relationship. "I was like, 'I just got my heart broken, I'm in LA for the first time and I'm messed up,'" he remembers. "I did the song in four takes."

As a young artist with an intuitive understanding of musicianship, it makes perfect sense that Rome's creative process is defined by boundary-setting. "I treat it like work," he says of his studio time. "I don't like hanging around with people in the studio. Nobody fuck with me; just let me do what I've got to do." But despite this honed focus, Rome is just like any other 21 year old when the day wraps up.
"It's never uptight," he says, with a smile. "Monday night, what do we do? Let's get fucked up."

That's a juxtaposition - obsessive attention to detail mixed with a sneaky sense of fun - that brings an explosive dynamic to Rome's live performances. It's safe to say that you can abandon any thought of Rome as a bedroom producer hunched behind a laptop on stage. At a run of UK arena dates supporting his Dirty Hit labelmates The 1975 in early 2019, Rome was firmly at the forefront, stalking the stage with purpose, bouncing on the balls of his feet, and holding his microphone aloft with the conviction of a rock veteran. Does his friend and collaborator Matty Healy give him advice on performing? "Yeah, like a big bro," says Rome. "He just tells me to have fun."

There seems to be an intuitive kind of synergy to Healy and Rome's close creative relationship - the pair were evenly matched on 2018's duet 'Narcissist,' a sly anthem for anyone addicted to their smartphone's scroll. Rome even lives in The 1975 frontman's old house in east London. The partnership between them is even-handed, and based on artistic kinship. "We both make a genre-bending type of pop music," Rome says, "We get inspired from places that you wouldn't expect." It follows, then, that 'Crying In The Prettiest Places' is vividly strewn with sonic curveballs. Take opening screamo-pop anthem '5 Ways To Bleach Your Hair,' or EP highlight 'Stoned In The Valley' - a breezy skatepark anthem that hybridises millennium-era pop punk sounds with a modern emo-rap. "That's the shit I grew up on," says Rome of pop-punk. "That's my Nirvana: Box Car Racer, Blink-182 and New Found Glory. I wanted to reference nostalgia, but [to be] more modern lyrically and a bit darker."

Born in a tough Manila neighborhood, Rome grew up keeping one eye over his shoulder. "I grew up in such a dark, dark street," he says.
"The gangs were in my [neighbourhood]. If you dressed a certain way - anything out of the ordinary - you can get beat up. You can get killed." He stresses that this isn't the experience of all Filipinos.
"That's the street I was in," he says. "I'm not generalising the Philippines."

But Rome refused to live in fear of bullies. As an emo kid who'd wear skinny jeans (from the 'petite' women's section of clothing stores) and tight T-shirts, he started learning self-defense to protect himself.
For a while he'd get into fights, but then his dad - a "frustrated producer" himself - started teaching Rome the basics of music production software at 12 years old. "Making music made me get so obsessed with it," he says. "I was super into hip-hop and obsessed with J Dilla and Nujabes." His genre-blind early taste spanned Slipknot to 2Pac, and the New Order and David Bowie records that found in his Dad's stacks of vinyl. By his mid-teens, Rome had moved on to shoegaze bands like My Bloody Valentine and Slowdive. "That's when I started getting into songwriting," he says. "That's why my first demos sounded so hazy - that ethereal R&B that's intimate, but it's huge walls of sound."

On SoundCloud, you can still find evidence of Rome's shoegaze-inspired early demos, like 2013's 'Peace With You,' a spliced-up ambient experiment with the haunting power of Angelo Badalamenti's 'Twin Peaks' score. It was enough to catch the attention of Canada's electronic phenomenon Ryan Hemsworth, who released Rome's hushed, twinkling R&B mid-tempo 'Seventeen' as part of his Secret Songs series. After that song garnered breathless write-ups from taste making websites like The FADER and Pigeons and Planes, Rome met Matty Healy in 2017, and signed to The 1975's Dirty Hit label a few months later (he batted off a host of other label offers from US and UK imprints).

In his music, Rome's gaze is firmly fixed on the future. The bleepy circuit board textures of 'Rimbaud, Come and Sit For A While' play out like Sigur Rós covering The Postal Service's wistful pop, and you can imagine the knotty beats and balmy vocals of 'All Up In My Head' soundtracking an Ibiza sunrise. Meanwhile, the soft R&B snap of 'Cashmoney' puts a playful spin on clichés of luxe living, on which Rome name-drops Dolce and Gabbana and Balenciaga over a twinkling beat. "I wrote it when I was 16, working in a call centre in Manila and I started buying my own clothes," he says. "I've always written songs about fashion. I just never really knew how to put it in a pop context. Fashion inspires me. It's a form of expression for me."

Rome has been through enough tumult for one lifetime. Now in a better place, he's able to take the long view, with a mature perspective that feels beyond his years. He speaks thoughtfully and candidly about the implications of his decision to live out loud, in full colour. "My videos are people who dress like me, who have hair colours like me," he says. "[Hopefully people] start to think, that's the future, it's going to be normal you know." Just as Rome's music is a bellwether for pop's expansive new possibilities, his bold eye-popping aesthetic can help to open people's minds. And doubtlessly, many more ears will be opening to No Rome very soon, too. 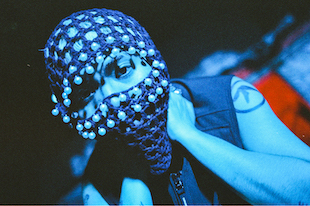