At just 24 years old, REZZ stands with the best of her peers, but she has a sound that's all her own. Propelled by her boundary-pushing artistry, REZZ has racked up tens of millions of streams, sold out legendary venues like Red Rocks, headlined top festivals around the world, and graced the cover of Billboard. She oozes originality and produces genre-bending electronic works, striking a sharp balance between bass-heavy and minimal tech compositions. Her first independent project - the adventurous 'Beyond The Senses' EP - is "her most impactful project to date" (Billboard).

REZZ is the undisputed female leader of the electronic music world. She tops line-ups alongside mega-stars like Diplo, Marshmello, and ZEDD, and has played everywhere from Coachella to Austin City Limits to Electric Forest. Fans follow the small-framed, yet commanding producer with an insatiable hunger, evidenced by the 20K+ member Cult of REZZ Facebook group. REZZ's live shows are hypnotic - her otherworldly visuals and signature light-up glasses transport audience members beyond their senses for an out-of-body experience that leave them wanting more.

REZZ was still a teen when she decided to pursue music, starting out as a local DJ in her hometown of Niagara Falls in Ontario and later studying sound design and psychology to aid her creative process. She built a Soundcloud following with a series of free releases that caught the ears of deadmau5 and Skrillex, who in 2015 oversaw the release of her debut, 'Insurrection', on OWSLA's NEST HQ imprint. The three-track EP led EDM.com to call REZZ a prodigy, and MTV dubbing her the "Queen of the Dark Techno Scene."

In 2016, REZZ released 'The Silence Is Deafening' EP on deadmau5's mau5trap imprint, which launched her into the upper echelons of the electronic scene. 'Something Wrong Here', a follow-up EP released that same year, caught the international press' attention as REZZ began selling out shows around the world. In 2017, REZZ dropped 'Mass Manipulation', her full-length debut on mau5trap that was awarded the 2018 JUNO Award for 'Electronic Album of the Year'. Her second mau5trap LP, 2018's 'Certain Kind of Magic', testified to her ability to demand a listener's attention with, as DJ Mag describes, her "uncanny ability to tread the line between desire and tension." That album earned her a second JUNO nomination and worldwide acclaim from Billboard (who dubbed her Billboard Dance Breakout Artist of the Year), Mixmag, Dancing Astronaut, and more.

'Beyond The Senses' is a transportive, boundary-pushing 6-track collection that reimagines how we consume music outside of the realm of our 5 earthly senses. To celebrate the EP's release, REZZ partnered with VR leaders Wave to create an eerie, meticulously crafted 'Beyond The Senses' VR world. REZZ premiered the 'Beyond The Senses' in virtual reality, guiding fans through through a supernatural landscape as her avatar played the EP for the first time in full.

With this forward-thinking mix of technology and creativity, REZZ further establishes her place as a global dance music tastemaker and trendsetter. 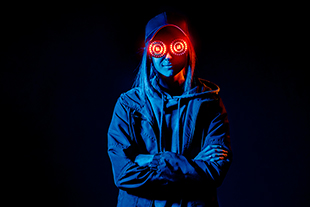