Fredo's forthcoming album, 'Third Avenue', is an album of firsts. It's his debut full-length, and his first album on Since 93' - but it's also the first project the 24-year-old rapper worked on entirely out of prison.

The West London MC dropped his first track 'They Ain't 100' in March 2016, just before he turned 22. He wasn't expecting anything.
Three weeks later, he went to prison. The song blew up while he was away, gaining radio play and racking up millions of views, but he didn't realise how big it had gone until he came out and people were asking him for more music. This would have spelled happy days for any artist, but for Fredo it was particularly remarkable. Not only was 'They Ain't 100' his first track, it was also his first attempt at rapping - save for one unreleased song done earlier the same day. The only time you'd catch him in a music video prior to that was in the background of visuals for the likes of Harrow Road Boyz, Rugrat and Ratlin.


Did the song's unexpected success motivate him to pursue a career? Well, he says, "It didn't make sense for me to stop there."

Fredo's rise over the last two years has been unstoppable.
Despite setting the bar high with 'They Ain't 100', Fredo went from strength to strength. Mixtapes 'Get Rich Or Get Recalled' (2017) and 'Tables Turn' (2018) established a balance of the celebratory and the realistic, success and street life, in his bars - something he's since gone on to perfect with 'Third Avenue'. Meanwhile, his features on tracks by British rap staples Kojo Funds, Young T, Bugsy, and Dave - whose 'Funky Friday' was one of the hottest UK singles of 2018 - have established his ability to rap over a wide variety of beats.

With an instinctive feel for rap, his clear delivery and trap-influenced production have earned Fredo the title of 'London's YG'.
Although he has a wide range of interests, he spent his formative years listening to American rappers like Styles P, D-Black and 50 Cent, who have perhaps had an influence on his style. But what Fredo has created is very much his own.

As with most London rappers, Fredo's music is defined by his area. His mum, originally from Hertfordshire, moved to London after meeting his dad. They lived on 'Third Avenue' for a while, where the album title gets its name, but Fredo moved back to Hertfordshire with his mum after getting kicked out of school. When he got kicked out of school in Hertfordshire as well, they moved back to 'Third Avenue'. "That's where I really grew up," he says, "Where I learned everything, where I started from."

Above all else, Fredo's music is motivated by a desire to see the realities of his area represented by someone who was living them truthfully - something he thinks has been lacking when it comes to the Mozart estate. A particularly rough part of West that has generated its fair share of increasingly troubling headlines lately.

"Most areas in London have a voice, and I just felt like my area didn't have a voice," he says. "You could go on the internet and see Kilburn youts, Church Road youts, Brixton youts, all different ends.
But you couldn't really go on and see how we were living."

Written over a nine month period and produced mostly by JB, 'Third Avenue' is a marked growth from Fredo's previous releases.
Packed with spitfire verses, catchy hooks and a balance of hard street rap and slower jams, the sound is as an even more refined evolution of the work he began with his mixtapes. Beyond sound, though, Fredo himself is in a different place.

It's the first release he's ever written and recorded entirely out of prison - somewhere he doesn't plan on returning. The opportunities presented to him through his music have meant he now finds himself off probation "or some sort of monitoring" for the first time since the age of 15. That freedom has given his music a fresh perspective. As a result, 'Third Avenue' is an album written by someone bridging two different worlds - navigating personal success while many of his friends are in the same position he was until recently. It's an exciting place to write from, straddling both past and future at once.

"I've always been in and out of jail from young, so I'm definitely in a different space now," he says, "It's affected my outlook."

A lot of the things Fredo is getting to do now, he's doing for the first time. He'd never been to a festival or clubs in London until he was being paid to perform in them, for example, and these experiences have made their way into his music. Documenting both everyday celebrations and grievances, as well as reflections on the past, 'Third Avenue' is Fredo most positive body of work to date - an album he describes as "really him".

Nowhere is this fresh outlook better crystalized than on lead single 'BMT' - an ice cold chunk of polished street rap full of punch lines that announce where Fredo is at right now. As the album's first foot forward, it confirms that this is a different side to Fredo to what you've seen before. "I used to be that guy, right on the frontlines and now I'm on more of a big man ting. I just been making more grown moves lately. Trying to stop smoking weed and be loyal to my girl and stuff like that."

'Third Avenue' starts with a slew of tracks similar to 'BMT' - trap-influenced street rap full of bravado, documenting the perks and perils of fame. The pride that comes with being in demand; the pleasure that comes with having access to all the spoils you didn't before; the anger over changing relationships with past associates.
Towards the end, though, it takes a tender turn. 'Love You For That' is both a letter of apology and appreciation to his mum, in which Fredo shoulders responsibility for certain past behaviour that was coloured by circumstances he's since found a way out of.

"My mum's a really big part of my life," he says, "I've obviously apologised for things I've done, but I felt like a song for her on my first album was only right."

'Third Avenue' opens with a track taking stock of where Fredo is right now, but it closes with an acknowledgement of where he came from and, to a certain extent, still is. The album's title track and closer, 'Third Avenue' starts by directly addressing the friends he has lost. It then rolls, on a steady beat over melancholy keys, through a diaristic summary of his personal life - a heartfelt moment that brings out Fredo's more melodic side.

Above all else, 'Third Avenue' is the work of an artist searching for acceptance. On the broader landscape of UK rap, it stands out for being both uncompromising in its content and accessible in sound.
Fredo's intention is to represent the specifics of his area in a way that's accessible to anyone.

"I'm just trying to find a balance between really being from the roads and really being allowed in the industry," he says. "I want street guys to be accepted. I want people to know that we can do the right thing if you give us the chance."

Fredo may not be the first rapper to come with that message. It's something Giggs has been doing for a long time, but Fredo is bringing something fresh for his generation, his age, his area. "I'm just trying to do what Giggs done again, and just make a serious album that everyone can listen to."

"I don't take this thing for a joke," he concludes, "I really feel like I was going to have a crooked life my whole life, and this is my only chance and I'm not going to waste it." 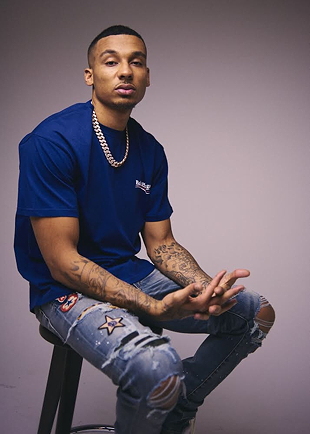