With her powerfully vulnerable lyrics and sincerely breathtaking voice, Malika Hamzaa is an artist whose music sounds emotionally-wise beyond her 20 years of age. As the London singer-songwriter - who goes, simply, by Hamzaa - says, "The most beautiful thing about humans is that we can speak; that we can say how we feel and voice our opinions". This expressiveness that she sees in human nature is something that seems to resound innately and effortlessly in her soulful, R&B-pop, not least on her stunning EP, 2018's 'First Signs Of Me'.

Hamzaa has been rising steadily into the public consciousness this past year: there was her sold-out debut headline show at London's St Pancras Old Church, followed at the start of 2019 by another sell-out performance, this time at Omeara - the show got a four star review in the Evening Standard, who compared her to a 19-era Adele. She has supported Ray BLK; been called "the real deal" by The Line Of Best Fit; received radio support across tastemaker platforms like Repezent, national stations like Radio 1Xtra, and Julie Adenuga's Beats1 show; not to mention co-signs from Stormzy, Wretch32 and Ghetts, who both hopped on part two of her sublime track 'Breathing'. On top of all this, last year when when she only had two songs out, the executive producer for BBC institution 'Later... with Jools Holland' heard her on the radio - what followed, very quickly, was a sublime debut performance on the show.

Hamzaa's journey, however, starts long before all that - and, as she puts it, "I want people to fall in love with the journey and the story rather than just the hype and excitement."

Her childhood in East London's Hackney was one full of creativity, growing-up singing-along to a diet of artists she describes as "old school classics" at home (she cites the likes of Aretha, Beyoncé, John Legend, and even Dolly Parton), with her mum encouraging that passion for performance by sending her to various performing arts and stage schools. Aged 11, Hamzaa went to boarding school ("mum wanted me to get a chance to be out of our area"), where she became deeply involved in directing plays, arranging songs, and participating in singing competitions.

Halfway through A-Levels, however, she decided to drop-out and pursue music properly. Via a stint working the cloakroom at Brixton Academy, she was: "Always writing, always singing, always dancing and putting it into whatever aspect of my life."

Indeed, underpinning her rise to prominence was that Hamzaa had started writing songs when she was just nine years old. It was around the same time she had started learning piano, and she began to put her poetry to music. An only child, creating her own place for self-expression was vital - "I had no one to talk to, really, but myself - obviously I could talk to my mum, but it's a bit different when you're younger! So any of the thoughts that I had, I was very good at putting it down on paper and then getting on the piano finding some chords."

Via a now lost EP (the files were on her old laptop), almost a decade later Hamzaa's songwriting process comes from the same place - putting down her thoughts, diary-like, to process things, while also giving other people a space to relate: "I want to open a conversation and make people be fearless in their speech," she says.

'First Signs Of Me' reflects that boldness of intent, self-interrogating her mental space in the aftermath of a break-up, "rather than sitting in my sadness". This is particularly striking on opening track 'Red', which softly speaks of fear and suicidal thoughts and grappling with self-love. The beautiful accompanying video, filmed at Southend-on-Sea and directed by Filmawi Efrem, sees a dancer on the water, keeping above it all while everyone watches from the shore. "I'm very sensitive and very anxious," explains Hamzaa, "I've suffered from severe depression and anxiety, so I really advocate for talking about mental health. I want people to try and be in the best mental space possible, or working towards that - so I try to emulate that myself. It's tough sometimes, but I like to be the strong friend, the backbone of things. It makes me happy when I feel other people are good. I know what it's like not to feel good."

Comparisons with the likes of Amy Winehouse make sense - indeed, Hamzaa even lists her off when she talks about her aims for the future: this is timeless, universal, emotionally resonant music topped with a spellbindingly powerful voice. Not that Hamzaa needs to be compared to anyone but herself - what she's creating is deeply personal, and she's keen to highlight that the only trajectory she's focussing on is her own. Accordingly, she's not in a rush to put out a load of music, instead happy to let people take their time with 'First Signs' - "I don't wanna rush and put out something that I don't completely love," she explains, "I don't want people to see or hear something and just be like 'mmm, it's alright' when I know I didn't fully love it in the first place."

For now, there's a slew of singles she's planning - 'London' is the first post-EP, and is full of evocative, uplifting gospel warmth, as she talks about never giving up and her enduring love for her, at times, overwhelming city. Another forthcoming track, 'Write It Down' is one she describes as "powerful". Hamzaa doesn't like swearing, but admits the track is a "fuck you" to people who don't understand what she's about - to so-called friends trying to invalidate what she's doing and what she's talking about in her music while she's putting her all into it.

It all comes back to that focus on self-expression rather than on expectation; taking her time to evoke emotions that last, rather than riding the hype wave: "The way I want my path to go is longevity, I want to be remembered for my music and for what I was able to do with my music. And that longevity comes when you play your cards... not right, but you play them smart. You could play the wrong card, but if you've taken your time grinding and you've worked for it, it's gonna connect somehow."

And with that attitude, Hamzaa looks set to have a straight flush.

"There is no doubt about it - we're going to be hearing a lot more from Hamzaa and we are so, so ready for her." - The Line Of Best Fit

"Knows how to sing emotions that you didn't even realise you were feeling." - Julie Adenuga 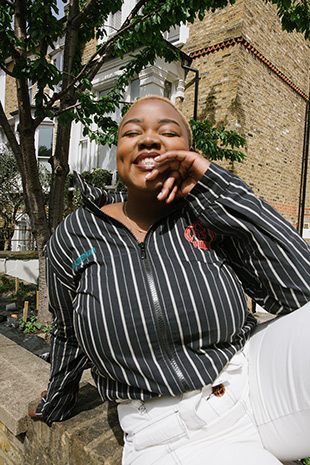