The budding grunge four piece Momma has always relied on songwriters Etta Friedman (21) and Allegra Weingarten’s (22) symbiotic writing style and creative intuition. “I remember the title, Two of Me, originally came from this creative day Etta and I were having together,” Weingarten recalls. “Etta said something like, ‘It’s crazy — being alone with you is like being alone with myself.’ It references that feeling and encapsulates how we write together: a form of communication, where we’ll constantly switch off who is playing lead and who is playing rhythm guitar in the same song.”

Self-taught guitarists who grew up outside of Los Angeles, Friedman and Weingarten met by fate in high school and eventually began writing songs together. The pair’s close friendship provided an open channel to create and experiment from a place of trust and joint experience. Inspired by songwriters like Kim Deal, Liz Phair, and Elliott Smith, the two developed a knack for dynamic song structure and gripping lyrics fused by a dulcet pop sensibility. Much like the two fish that depict Friedman and Weingarten’s birth sign, Pisces, the duo are locked in an infinite loop, constantly feeding off of one another’s musical ideas. 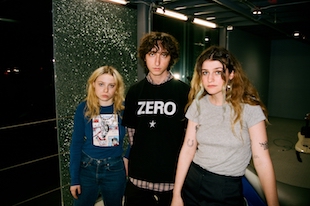