'Seeing Eye Dog', HELMET's seventh album, is one of the band's most uncompromising and ambitious releases, embodying the classic and utterly unique HELMET sound and pushing it into regions the band has never before explored. One big reason for that spirit of musical adventure is the record is essentially self-released (through the Work Song label). "I just felt completely free to do whatever I wanted to do," says frontman Page Hamilton. "It was really fun to make this record because I just felt this... freedom."

Freedom can also arise from limitation, something Hamilton knows well-- as ever, he insisted on having few overdubs and edits on 'Seeing Eye Dog'. "This album is human and honest," he declares."People have always commented that we sound like our albums live, and our recording approach has a lot to do with that. Humans playing music will always be better than chop-shop rock."

Besides Hamilton, the humans on 'Seeing Eye Dog' include drummer Kyle Stevenson, who joined HELMET in 2006, guitarist Dan Beeman, who's been on board since 2008, and long-time HELMET bassist Chris Traynor. (Dave Case is the band's touring bassist.) The album was produced by Hamilton, with additional production by Toshi Kasai (Melvins) and vocal production by Mark Renk.

Some history: In 1989, Page Hamilton co-founded the New York-based HELMET, fusing Zeppelinesque riffing with a vehement post-hardcore precision, augmented by dense chords and offbeat time signatures based in Hamilton's formal jazz training. The combination was that rarest of visionary creations -- it was successful in its own time. After their 1990 debut album 'Strap It On' (on revered indie label Amphetamine Reptile), HELMET unleashed the major label 'Meantime' (1992), a widely acclaimed album that earned a Grammy nomination, went gold, and launched a thousand other bands. Betty followed in 1994, successfully branching out from the band's ferocious attack and into more varied musical waters. (In 2010, HELMET issued via their website HELMETmusic.com a digital-only deluxe version of 'Betty' that includes 14 original album tracks plus five bonus tracks.) Another acclaimed album 'Aftertaste' followed in 1997 and after nine years and thousands of shows, HELMET called it a day in 1998.

Hamilton went on to do soundtrack work for major Hollywood movies like Catwoman, S.W.A.T., Titus, and Saw, among others, formed the band Gandhi, and, following in the footsteps of greats like Adrian Belew and Stevie Ray Vaughan, played lead guitar in David Bowie's band in 1999. In 2004 Hamilton restarted HELMET, releasing two acclaimed albums -- 'Size Matters' in 2004, 'Monochrome' in 2006 -- and co-headlining the Warped Tour that year. HELMET did extensive US and European touring in 2009 in preparation for the new album.

Bands such as the Deftones, Rise Against, Pantera and Tool have all cited HELMET as an influence, and not just for HELMET's blistering, aggro approach but for the band's sheer musicality and brains. See, HELMET, among other things, is a work of art. Hamilton is a trained musician who happens to make heavy, brutal music, a guy who digs Bartok and Minor Threat. Which is why, as 'Seeing Eye Dog' proves, HELMET is a surprisingly flexible concept.

"The HELMET musical vocabulary is well established at this point, but I continue to work on a variety of musical projects that inevitably influence the HELMET songs," says Hamilton. "I've been working on movies with Elliott Goldenthal and co. for 17 years now and had never really experimented with incorporating these soundscapes (or shit sculpting as I prefer to call it) into HELMET songs. We had a much better recording situation in which I felt much less time pressure and was working with an engineer who was patient and very creative (Toshi Kasai), so away we went. I started layering upper parts of the chords and was digging the sound so I went with it."

'So Long' and the title track embrace the classic HELMET approach: raging slabs of guitars, drill-sergeant vocals, drums like an expert beating, and guitar solos that scrawl hectic graffiti across the band's monolithic attack. The lyrics, as Hamilton has said, spring from a combination of "comedy and disgust," particularly in the scathing 'Welcome to Algiers' and 'In Person.'

But 'Seeing Eye Dog' also finds HELMET pushing at its own boundaries -- the grimly affecting 'White City,' for instance, is as close to a ballad as HELMET has ever dared. 'LA Water' sounds like a Beatlesque HELMET and later, 'And Your Bird Can Sing' is a HELMETesque Beatles, with the band wielding the Fab Four's standout 'Revolver' track like a molten sledgehammer. The mostly instrumental 'Morphing,' the luminous sound sculpture in the middle of the album, might seem unlike any other HELMET track, and yet it has the same monumental quality as the band's most brutal work. (And if you hunger for HELMET in all its live glory, 'Seeing Eye Dog' comes with a bonus disc, a blistering live set from the San Francisco stop on the 2006 Warped Tour.)

The freedom and adventurousness of 'Seeing Eye Dog' (title via Ezra Pound, by the way) didn't come out of nowhere. Hamilton encountered some record label interference in the past and vowed that it would never happen again. "After that, I said, I built this thing and this is the way it is," Hamilton says. "Fortunately, those experiences ended up helping me maintain a singular attitude that's really conducive to writing rock songs." 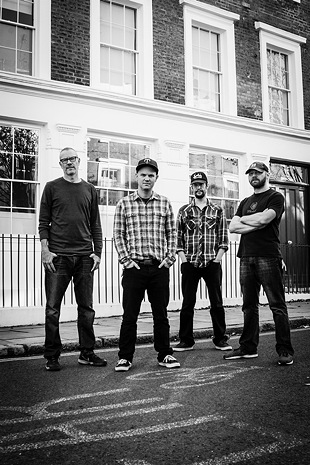