The last few years have been packed full of milestone events – including the roof-raising Mardi Gras tour and sell out shows at London’s Roundhouse and at the Brighton Dome as part of the Brighton festival – and seen Hot 8 Brass Band reaching out ever further. Delighting crowds with their rambunctious mix of hip hop, funk and inimitable Big Easy jazz, they have sold out strings of headlines alongside festivals including Glastonbury’s West Holts stage, BST Hyde Park (supporting Mumford & Sons), Madness’ House Of Common, North Sea Jazz, Secret Garden Party and WOMAD.

Along the way, they have been invited to tell their remarkable story and play their incendiary music on platforms as diverse as BBC Radio 4, ITV, KCRW, Radio France, and Australia’s ABC News. After a festive appearance Live at Maida Vale for Lauren Laverne (BBC 6 Music) and a raucous ‘Hot 8 New Year’ offering on Jools Holland’s New Year’s Eve Hootenanny, Hot 8 Brass Band kicked off 2019 with the release of their widely acclaimed “Take Cover” EP - receiving support from across the BBC, Rolling Stone, John Kennedy (Radio X), Tony Minvielle (Jazz FM) Offbeat Magazine, Huw Stephens (BBC R1/6Music) and Craig Charles (BBC R2/6Music) amongst others - and successful European Take Cover 2019 tour which included sell out dates across the UK including London’s Roundhouse. Their success continued with a Record Store Day release of “Working Together EP” on transparent blue vinyl gaining praise across the board.

Transcending genres and trends, Hot 8 have performed and collaborated with artists from Lauryn Hill, Alice Russell, Mos Def to the Blind Boys of Alabama and George Ezra and have decade long affiliations with actor/BBC 6Music DJ Craig Charles, among others. They were nominated for a Grammy in 2013 for their second album ‘The Life and Times Of…’. and, with acclaimed releases such as ‘Vicennial...’, ‘On The Spot’ and “Take Cover”, continue to exemplify their ability to honour their city’s musical traditions while forging their own powerful legacy. 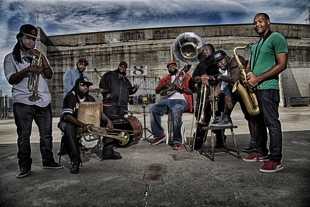