Since coming off the road after their last 95 date World tour which began at SXSW in Texas in 2009 and ended with another triumphant main-stage appearance at T In The Park in 2010, Craig and Charlie Reid then spent a year writing, subsequently recording their ninth studio album last autumn in Bath with producer Steve Evans at the helm. The album entitled 'Like Comedy' is released in the UK on 7th May by the leading and vibrant independent label Cooking Vinyl.

2012 then sees The Proclaimers back out live with a busy summer in UK and Europe which includes headlining the Hebridean and Big Tent festivals in Scotland, followed by another headline slot at Cambridge Festival and main stage appearances at the V Festivals in England. The Proclaimers have also now confirmed a six - week UK tour for October/November.

2012 also sees the filming of the movie version of the hugely successful award winning musical drama 'Sunshine On Leith' featuring songs by The Proclaimers. Screenplay written by Stephen Greenhorn, produced by Glasgow based production company Black Camel Pictures and directed by Annie Griffin.

October 2011 saw the release of special editions of The Proclaimers first three albums released on Chrysalis ('This Is The Story', 'Sunshine On Leith', 'Hit The Highway'), each contains the original album plus a bonus disc containing B sides, live tracks and previously unreleased radio sessions, all newly remastered at Abbey Road Studios, London.

Strikingly individual, twin brothers Craig and Charlie Reid have over the years enjoyed huge success across the globe as the emotional honesty, political fire, wit and sing-along raucousness of their songs and their extensive touring has enlightened and entertained fans new and old. The Proclaimers have carved out a niche for themselves in the netherworld where pop, folk, new wave and punk collide. In the process they have enjoyed Gold and Platinum singles and albums in UK, USA, Canada, Australia and New Zealand.

The last few years has see The Proclaimers grace main stages at the likes of V Festival, T In The Park, Isle Of Wight Festival, Womad and Glastonbury in-between regular touring across the globe. Craig and Charlie have reached the rarefied status that few have been able to achieve: with nearly three decades of career longevity, they are as innovative as ever and with every album and show played, they've continued to garner new fans.

In 2009 The Proclaimers released to great acclaim their 8th studio album 'Notes & Rhymes' (Universal) and hit the road for another 95 date World tour. Earlier in March, Craig and Charlie headed over to Austin, Texas to make their debut at SXSW where they performed a series of seven acoustic showcases, including a one-off Scottish extravaganza, sharing a bill with Glasvegas and Primal Scream. Whilst 2010 was spent mainly writing, The Proclaimers did another 21 summer dates in Europe climaxing with another main stage T In The Park performance.

2008 had seen The Proclaimers bring a huge 129 date, year long World tour to a triumphant conclusion with a concert at Edinburgh Castle.
Previously in 2008 The Proclaimers toured across Europe before heading off to USA & Canada for a 2 month coast to coast tour. They followed that with a variety of shows from Muscat to Bermuda, alongside English seaside resort gigs and European festivals including their fourth Glastonbury appearance. September 2007 saw The Proclaimers release their seventh studio album 'Life With You' (Universal) in the UK to fantastic critical praise and great commercial success. October then saw The Proclaimers kick off their biggest ever UK & Ireland tour, 44 dates to over 100,000 fans. In Scotland, they sold more gig tickets than any other single act in 2007. Earlier in 2007 they topped the UK singles chart in March with a rousing new rendition of their classic anthem 'I'm Going to Be (500 Miles)', collaboration with comedians Peter Kay and Matt Lucas for Comic Relief, raising over a million pounds in the process.
EMI relaunched their 2002 'Best Of' collection, re-entering the Album Charts at No 5 with sales soaring beyond platinum.

Born in Leith in 1962, Craig and Charlie Reid grew up in Edinburgh, Cornwall and Auchtermuchty in Fife. At home, they listened to early rock'n'roll and country greats such as Jerry Lee Lewis, Merle Haggard and Hank Williams. At school they played in punk bands and formed The Proclaimers in 1983. With a fervent live following growing in Scotland, particularly in Inverness where they performed regularly, their first big break came late in 1986 when they were invited to tour with The Housemartins. Then in January 1987 they made a now seminal appearance on the Channel 4 pop programme The Tube, performing 'Letter From America' & 'Throw The 'R' Away'. Singing in regional accents about Scotland - its emigration and its politics - they were a far cry from the mid-Eighties playlist staples of Rick Astley and Sinitta, and became a phenomenon almost overnight, signing to Chrysalis within a month and recording their debut album acoustically, 'This Is The Story', a week later, produced by the man who also signed them to Chrysalis, John Williams.
Voted NME Readers Best New Band that year, they toured the UK extensively and a new 'band' version of 'Letter From America', produced by Gerry Rafferty went Top 3 in November.

Complementing their raw, stripped down delivery with the greater musical scope of a full band, they then embraced country and rock on their second album, 1988's 'Sunshine On Leith' produced by Pete Wingfield, which also saw them form their first full live band and go on a 9 month World tour. In addition to the deeply moving classic title track which has gone on to be an anthem for Hibs fans, the album featured hit singles, the raucous, euphoric 'I'm Gonna Be (500 Miles)' and 'I'm On My Way', The latter track subsequently accompanied one of the pivotal scenes in the hit movie 'Shrek' (2001) while in 1989 'I'm Gonna Be' spent 6 weeks at number 1 in Australia and a was a top 10 college radio hit in USA. The song went on to soar to No. 3 during a 6-month reign in the US Billboard Singles Chart in 1993 after appearing on the soundtrack of the Johnny Depp film Benny And Joon.
Previously in 1990 The Proclaimers had a huge UK & European hit with their 'King Of The Road' ep. The Proclaimers returned with 1994's 'Hit The Highway', an album that featured a three-piece brass section yielding the hit 'Let's Get Married'. A longer than intended break then ensued before a fourth album, 2001's 'Persevere', was cut in Minneapolis. Produced by Chris Kimsey with an all star American musician line up, another fantastic collection of Reid/Reid songs re-established The Proclaimers as they went back on another mammoth year long World tour.

Since then, the band have barely stood still, following the 2002 release of their 'Best Of' with two more acclaimed studio albums, 2003's Edwyn Collins produced 'Born Innocent' and 2005's more soul orientated Mark Wallis / David Ruffy produced Restless Soul. In addition, they have been extremely active on the live front, touring constantly and wowing festival crowds at the likes of Glastonbury, T In The Park, V Festival, Isle Of Wight and Womad, while also opening the bill at the 2005 Live 8 concert at Murrayfield Stadium. Another, rather more unusual show saw them perform on the pitch at Hampden Park to over a billion TV viewers before the 2002 UEFA Champions League Final between Real Madrid and Bayer Leverkusen. 2006 also saw a notable appearance in an episode of 'Family Guy'.

Their songs, too, have provided the inspiration behind an enormously successful, highly acclaimed, award winning new musical, 'Sunshine On Leith', put together by the Dundee Rep Theatre. Written by Stephen Greenhorn. The drama follows the highs and lows of 2 soldiers returning home from Afghanistan. Families, relationships and life in Leith are not all plain sailing in this exceptional love story about every day life in Scotland. Directed by James Brining, the musical first toured Scotland in Spring 07, returning in November 08 for a 4 month run in Scotland and its first foray into England at Coventry's Belgrade Theatre. The musical had it's third outing a 4 month theatre tour (3 months in Scotland, 1 month in England) in Autumn 2010 with the cast for this run starring Billy Boyd, most widely known for playing the character 'Pippin' in the movies 'The Lord of The Rings' and 'Barret Bondon' in 'Master and Commander: The Far Side of the World'.

Why did it take 20 years before anyone noticed The Proclaimers were born to be turned into a musical? Not since Willy Russell came up with 'Blood Brothers' has Britain produced such a perfect marriage of music and theatre. Had playwright and screenwriter Stephen Greenhorn done nothing else, he should be declared a genius for spotting that the songs of Craig and Charlie Reid - with all their emotional honesty, singalong raucousness and political fire - are a true gift to the stage. THE GUARDIAN

Matt Lucas is a huge fan and in the sleeve notes of their 'Best Of' compilation he writes of Scotland's finest Celtic soul brothers: "I find it hard to put into words quite how the music of The Proclaimers makes me feel. It makes me laugh. It makes me cry. It just makes me generally euphoric... Sunshine On Leith says more to me about my life and the way I feel than anything Morrissey or Cobain ever wrote."

On BBC Radio 4's Desert Island Discs, David Tennant describes his first track by The Proclaimers - "I could have chosen any and every track from this band, probably my favourite band of all time. They write the most spectacular songs, big hearted, uncynical passionate songs." 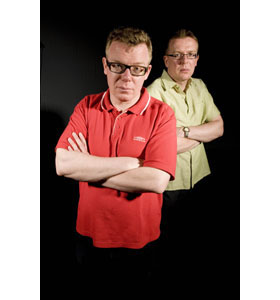