"If you like angelic harmonies, look no further than this song by Norwegian trio I SEE RIVERS. 'Helios' is pop at its purest, jumping between quiet intimacy in the verses and empowered chorus blasts to create a song that is both catchy and sophisticated, displaying the musical maturity and versatility of the group." - Wonderland

Norwegian "float pop" trio, I SEE RIVERS are known for their memorable melodies and untraditional vocal harmonies. After huge success with their first two EPs and support throughout national radio, TV and a sold out European tour, they are back this Spring with their newest single 'Helios' from their upcoming 2020 album.

Although they are all originally from Norway, the girls met in Liverpool whilst studying and have recently moved to Pembrokeshire in Wales. They fell in love with the Welsh coast line and mountains whilst recording their first EP at 'Studiowz’ with Owain Jenkins. Their musical soundscape has been associated with artists such as Fleet Foxes, Sufjan Stevens and First Aid Kit but their 2020 album has an added new electronic direction.

There has been endless enthusiasm for I SEE RIVERS from outlets such as CLASH Magazine, Line Of Best Fit, Fresh on the Net, BBC 6 Music, The 405 and JA JA JA, with the music video 'Play it Cool' featured on Channel 4's Sunday Brunch after a sold out tour alongside Newton Faulkner.

After recent highlights including being championed as one of BBC Wales' Horizons artists, two videos with Mahogany Sessions and the 10 track 'Best of Mahogany' compilation as well as getting featured on BBC Radio 1, BBC 2 and countless Spotify Playlists including 'New Music Friday UK & Norway', 'The Stress Buster' and 'Nordic Folk', the band ended 2018 with a sold out Europe tour supporting Cosmo Sheldrake.

Eline (Keys, vocals, percussion), Gøril (guitar, vocals, drum pad) and Lill (drums, vocals) layer their three-part harmonies and switch instruments throughout the set, showcasing their versatility and quality musicianship. Their live performances capture and enrapture audiences with sold out showcases with Communion and festivals around the world.

"...they've learned quickly what it takes to make a mainstream hit, which is what this might just be." - God Is In The TV Zine

I SEE RIVERS' unique "float pop" sound has landed them support from PRS Women Make Music and BBC Launchpad and are now in the midst of recording their highly anticipated debut album alongside Owain Jenkins, Toby Couling, Alec Brits and Emilie Krogh Johannessen back at 'Studiowz' in the newly renovated Carmel Chapel for a release in Spring 2020.

The first single from the album, 'Helios' is now available on all platforms.

"Sonically, 'Helios' represents a bridge between the two previous EP's and the upcoming album (2020). As the Greek God of the sun, Helios would emerge in the sky each dawn in his golden chariot, bringing the new day. In the context of this song, Helios is meant to represent the experience of seeing someone through rose-tinted glasses, thinking the world of them, seeing them as the actual sun, before finally seeing them in their true light." - I SEE RIVERS 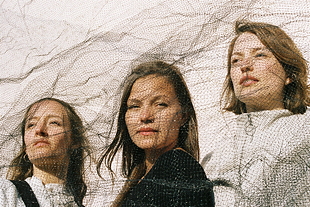