Audiovisual terrorists IC3PEAK - Nastya Kreslina and Nick Kostylev - a provocative duo hailing from Moscow, who have become one of the leading voices for eastern european youth. Their album CKA3KA (Fairytale), released in 2018, is a Russian horror fairytale put in a nowadays social context. Its arc passes through delicate, ethereal textures, frantic beat, fierce vocals and the occasional moment of clarity. Their self-directed videos already gained tens of millions of views. The band recently found itself at the spotlight of western media thanks to a campaign by Russian authorities against “undesirable music” with their concerts being shut down and the band itself detained by police. The duo focuses on bipolar aesthetics where ice cold, haunting vocal melodies lines fiercely combat blistering instrumentals, and the result is a production style thatʼs bold and brave. Equally, the band is brave in a broad capacity of ways, and much of their music attempts to criticise and condemn the Russian governmentʼs anti-gay propaganda and reclaim feminity as well as challenge Russian political oppression. Band members Nick Kostylev and Nastya Kreslina are behind all of the imagery and production for the group, and their baneful instrumentals and sharp lyrics are matched with stunning imagery that comes forth in their art and music videos. 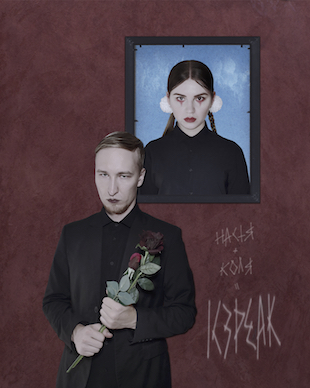