Imagine luscious Hollywood strings and soft vocals set to Latin-tinged and elegantly composed songs on a bed of sharp bright synths, metallic beats and jarring electronic noise. PC music meets Paul Simon and Nouvelle Vague. Jockstrap are the alternative pop duo based in London who offer this eclectic style of contemporary music. Georgia Ellery and Taylor Skye met at the Guildhall School of Music and Drama in 2016, forming the group a year later and releasing their debut track, 'I Want Another Affair' in December.

The pair's incredibly firm footing in classical music and jazz is evident within the writing, which combined with their love of experimental and contemporary music, creates a unique and advanced approach to the pop format. Ellery's lyrics are honest - sometimes powerful, or tender, and largely influenced by Plath and Rossetti. Her songs are structured like a jazz standard, yet they are distorted by Skye's darker, more intense instrumentation and vocal manipulation after they are fed through an analog tape recorder. Jockstrap take all the right cues from the pop world and blend them with experimental values to produce a sophisticated and exciting proposition. 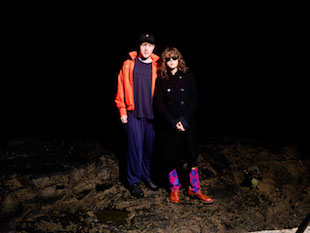