Joy Crookes' musical journey begins somewhere at the intersection of a Gregory Isaac album, a boy on a beach, and a chance encounter with an unidentified instrument. The latter happened when the now 19 - year - old South London singer was at primary school. "My friend who went to the best school in the area, the one with the highest Ofsted report, she walked past my house with this huge black case," reminisces Joy. "I called out to her, 'Jemima, what's that!?' she opens it up and shows me... " Inside the velvet lined case laid a trombone, an instrument that at that point, Joy had never seen before. "I remember going 'what are you doing!? It's gold! Hide it!'" she laughs.

It's a story she thinks about a lot, and retelling it seven years later, it's clear it was a formative moment. "My reaction then was, it's gold! I want to play it," explains Joy. "Later, I wanted to know more about brass, as a teenager I learned to record my own string section " she continues. "When none of your family or your school [own instruments], you think that kind of stuff is out of reach. But that moment made realise that if I ask and question things, that I will find a way to get there."

Joy - who is already garnering Amy Winehouse and Lauryn Hill comparisons from her own songs - began her musical journey years before her magpie - like introduction to brass. The daughter of a Bengali mother and an Irish father, she grew up listening to an eclectic mix of genres.
"My dad wanted to give me a real education. From Nick Cave to King Tubby to all this Pakistani music, he used to play me everything. He'd say, 'this is from your ends of the world, you should hear this.'"
Every week, while driving her to Irish dancing lessons, they would listen to a different album. Kendrick Lamar's 'To Pimp A Butterfly' one week 'Soon Forward' by Gregory Isaac the next. "Gregory is a huge influence," says Joy. "I know it's him as soon as I hear his voice, there's just something about it that sounds like milk" she gushes. "We'd be driving through South London in my dad's Peugeot convertible with the top down, Gregory Isaac pumping out of the speakers, it's such a nice feeling."

As a curious, passionate and music - obsessed 12 - year - old, Joy decided to start writing her own song and honing her modern soul sound.
Her first song "Seaside" was penned after falling head over heels for a boy by the beach. "I was absolutely besotted," she says with a grin. A natural wordsmith, her pre - teen emotions kickstarted a song writing process that would inform her adult life. Seven years later, her songs might have grown more sophisticated, but the approach remains the same: whether she's dealing with heartbreak or trying to come to terms with the latest Trump headline, Joy is committed to translating her most honest and vulnerable feelings to music.

While her candid song - writing and fearless attitude have won her a dedicated grassroots following, it was a baby - faced Joy singing a cover of 'Hit the Road Jack', which caught the attention of 600,000 viewers, and her first management company. Her early sessions were an uncomfortable introduction to the music industry, "I had to deal with a producer who thought he was God's gift to earth" she explains "he made me feel like I had to latch on to his every word. I didn't feel like I could have a say, because everything he said was always right. Writing had always been my therapy and suddenly I was scared of a blank piece of paper. I was a 15 - year - old girl in an industry where there aren't many girls that look like me, and where the whole industry is only about 16% women".

With a renewed sense of self and a fresh team of collaborators, Joy took back control of her burgeoning career. "I've learned to trust my instinct through being shat on in life," she says.
"When you go through difficult situations - personal or in music - you learn how to handle things. I've lived alone since I was 17; you learn how to wipe your own arse and how to conduct yourself in certain situations. It comes from my family, specifically the women in my family and them knowing how to say no. I take pride in holding myself up and being strong and tough when I need to be".

Joy uses her creativity as a tool to understand her own identity.
'Take Power', a timeless pop song and a sultry soul - infused salute to feminism. It began with producer Audra Mae saying, "so tell me everything about you". What followed was a 2 - hour chat between an all - female team, in which producers and artist shared stories of love and loss, joy and pain, debating what it means to be a woman.
"At points we'd been crying just sharing our experiences" says Joy. When the others left, she took to her laptop and wrote 'Power' in 10 minutes, or in her words, "I kind of just shat it out and it was there. There was nothing I could do about it." Produced by Audra Mae and Alex Hope, 'Power' is a deeply personal ode to being true to yourself in the face of adversity which has also been championed as a universal anthem of empowerment. With sharp lines like, "You're a man on a mission but you seem to forget, you came here through a woman show some fucking respect", women from across the world have flooded the comments of the video with messages of solidarity and appreciation. A striking short shot in black and white, it features a cast of Joy own friends and family, including her mum and grandmother, women who have had a profound influence on her music.

Joy places a lot of importance on the concept of history, and fittingly, her new EP is titled 'Reminiscence'. After visiting Bangladesh for the first time in her adult life In January, she began to feel uniquely connected to her past. "I came back a different person" she says. "Everything made sense, it made me understand my mums beauty.. not the way she looks but the way she carries herself, why my grandma is the way she is, why my own mannerisms are the way they are. I grew up in a Bengali household, it's part of who I am and it's us three, we're the women in the family, me my mum and my grandma, my family are run on women".

'Reminiscence' looks back on 2018, a pivotal year in the young singers life: a celebration of immigrants and her multicultural identity, and a love letter to the city that made her. Straddling soul, trip - hop and R&B, Joy's is a dexterous sound, which effortlessly showcases her melting pot of sonic influences. Ultimately, it's an EP of love songs - to London, to women and to Joy herself - songs that aren't afraid to be honest and raw, while also packing a political punch. Joy balances the retro stylings of Sade with the millennial wit of Lily Allen. She may be looking to the past, but smart, talented and strong, Joy Crookes is shaping the sound of the future. 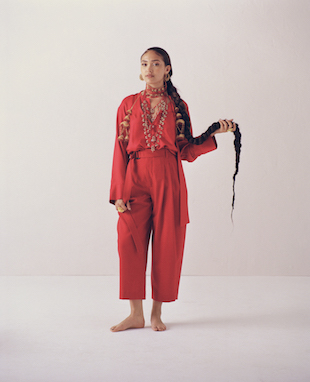