Enter the world of keaton dekker. An uncompromising East London musical and visual artist influenced by The Cure, Britney Spears, 80s horror movies and the nostalgia of PlayStation 2 games. Creating art on his own terms, the (now) 20-year-old producer started writing music in his bedroom out of school hours, using lyrics to translate complex scenarios in class, situations at home or with friends.

Releasing a refreshing take on synth heavy & 80s tinged dream pop, keaton’s sound has seen him supported by the likes of PAPER, DIY, The Independent, In Stereo, Dummy & many more and seen him quickly rise to be one of the UKs most promising and exciting voices in the pop arena.

keaton is also heavily involved in all his music videos, or ‘episodes’, directing the majority, which act as a companion to his 'the unwelcome series' EP. Candidly raw and youthful, the project was written in a then teenage keaton’s bedroom and could perfectly soundtrack a modern day coming of age film. Mixed by Tim Rowkins (Rina Sawayama) and mastered by Robin Schmit (The 1975), The Line of Best Fit named the singer ‘a trailblazing storyteller for frustrated creatives everywhere.’

With keaton’s observational lyrics and definitive sound, he’s paving his own path and utilising his skills to do it in a way that’s entirely his. keaton’s voice is a refreshing and essential one in the UK’s pop landscape, and ‘the unwelcome series’ places him as one of our most exciting new artists. 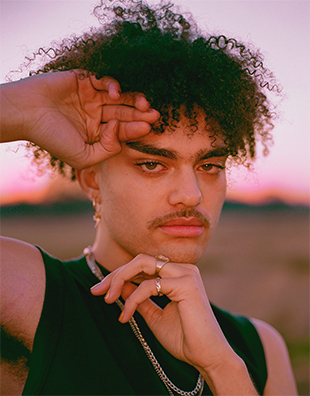