LAZARUS is an emerging musician from Malawi who is leading the way towards social change for people with albinism in Africa. His debut album, 'Stomp on the Devil', will be released in August 2019. Produced by UK based producer, Johan Hugo (Mumford & Sons, Baaba Maal, The Very Best), the album brings us to the streets of Malawi, where the album was recorded outside LAZARUS's house.

LAZARUS is bravely bringing his voice and his story to an international audience, by being the subject of a documentary that premiered at the Tribeca Film Festival on April 27th. The documentary is directed and produced by Oscar nominated, Emmy winning filmmakers, David Darg and Bryn Mooser. Madonna is an executive producer on the film. The film documents the real risks that people with albinism in Malawi live with each day, as kidnappings and murders take place because of the unfounded belief that their body parts can be used in witchcraft. The scoring of the film by Johan Hugo is made from tiny loops of LAZARUS' vocal, banjo, and drum with additional piano by Ben Lovett of Mumford & Sons.

LAZARUS is quickly crushing stereotypes in his home country Malawi, and beyond, as he leads the way towards social change for people with Albinism in Africa, with he and his team garnering support from the United Nations, Amnesty International, Oxfam, the US Ambassador in Malawi, and people in the music and film industry who rally behind LAZARUS to stop the killings of people with albinism.

LAZARUS the film premiered at Tribeca Film Festival in New York in April 2019. Heres what happened:

...Leonardo DiCaprio came for dinner and LAZARUS played him a private show. They then spent the evening talking about human poaching of people with albinism.

... LAZARUS met with Deputy Secretary General Amina J Mohammed, and is now working closely with the UN to tackle the killings of people with albinism in Malawi.

... LAZARUS won the Disruptive Innovation Award by Tribeca for his work as a albinism activist.

... LAZARUS recorded a bunch of songs with Bon Iver and The National (Big Red Machine) and performed live with them at Pioneer Works in Brooklyn.

... Maggie Rogers came and hung out with us for a day and made some music.

... TEAM LAZARUS raised over £20,000 on Kickstarter to build LAZARUS and his family a safe house in Lilongwe, Malawi. 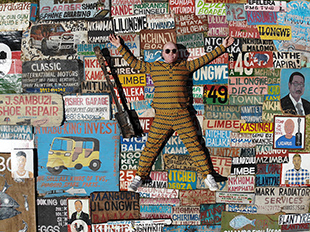