MOVEMENT are a trio from Sydney, Australia, building steam from a grain of salt with their seductive nocturnal music. Composed in a bedroom somewhere in the suburbs at night, their lucid, spacious and engagingly rhythmic body music is released on Modular Recordings.

"It's not R&B, it's not electronic, it's not pop, it's certainly not "rock", but it is strangely psychedelic and very much body music."
'Like Lust', Best New Track, Pitchfork

"The vocal take is light and controlled, but it burns with menace and the type of heat lent to whispered threats in the corner of a black-lit club."
'Us', Best New Track, Pitchfork

"This tune 'Us' from MOVEMENT might be our new Musical Hot Water Bottle anthem"
Annie Mac, Radio 1

"when first hearing MOVEMENT it would be understandable to assume it was just one producer weaving hazy, smooth sounds while repeating vocal phrases like mantras. But this is a band, and watching them play this music and sing these vocals in front of you is breathtaking"
Stereogum

"(a) swampy mid-tempo jammer with a yearning chord progression and the sort of heavy-chested, late night atmosphere that sounds really nice inside headphones"
The Fador on 'Ivory' 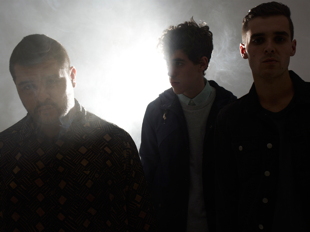