When she first appeared on the mainstream music scene in 2016, Nadia Rose seemed fully formed. A powerfully confident artist with a singular vision, she was as adept as coming up with striking visual concepts for her videos as she was cracking jokes, dancing, singing, or of course, rapping. When her inescapable, effervescent hit 'Skwod' went viral, landing her a MOBO and a place on the BBC Sound of 2017 shortlist, the press immediately began hailing her as UK hip-hop's next major star.

That kind of self-assured debut was only possible because Nadia had been quietly working on her craft for years before she hit the spotlight. Nadia was born in 1993, and grew up on the Whitehorse Road Estate in Croydon; a place where she was surrounded by music, and by family (her cousin Michael Omari, now better known as Stormzy, lived just up the road). "Looking back, it was good - I wasn't cushioned," she reflects. "I got to know the bullshit and the hardship, but there was also unity there, in the madness."

At school, she was the class clown, emulating her idol Jim Carrey in lessons to get laughs. She was also deeply creative from an early age, expressing herself through music, drama, and dance - prompting her parents to enrol her in weekend classes at Stagecoach and The BRIT School. It was at the age of 13 when her attention turned specifically to rap. "I would be in school, chilling with my friends, and I would start doing the bars I wrote the night before, and a crowd would gather," she remembers. "Someone would start making a beat on the table, my friends would gas me. I liked the feeling - of people crowding around me and listening to what I was saying. Seeing that people actually got it, that was a game-changer for me."

It was during college that Nadia met her go-to producer, Bamz, when she saw her beatboxing at an open mic night. The pair began performing on the open mic circuit together, building a reputation in live venues around London for their show-stealing performances. In the meantime, Nadia finished at college, and began studying music management and music tech at university; and on top of that, she worked a long line of retail jobs, in clothing shops, betting shops, and a discount store.

Trying to snatch time to jot down lyrics in between her 12-hour shifts and lectures was leaving Nadia exhausted. "It got to a point where I felt like I was giving Coral more energy than what it was I actually loved doing," she says. "Of course, I had to keep the lights on, I had to eat, so there was that financial battle of, 'If I leave this now, how am I supposed to survive?' But I like to take risks." So she quit her job and university to focus entirely on making it as an artist.

Shortly afterwards, she dropped her first hit: 'Station', a fast-spitting, sparse rap track with a visual shot on the tracks in south London (like she said - Nadia likes to take risks). The video began gathering heat when it was first released in the summer of 2015; it was shortly followed by Nadia's viral freestyle over a hazy Mila J beat, 'DFWT'.

"The late half of 2015 was just domination," remembers Nadia. "You couldn't turn left or right without seeing something from me." It was at this point that she signed with her management, and then Relentless, an imprint of Sony. Shortly after, she had her biggest hit yet - a song she had composed in the kitchen and the bathroom of her mum's house after quitting uni and her job. 'Skwod' is a rare gem: a lively, irrepressible hip-hop track that's all about women celebrating other women. With its instantly recognisable chorus, boisterous beat produced by Prynce MINI, and one-take viral dance video, since its release in summer 2016 it's become an anthem at protests for feminist groups like Sisters Uncut. "That was my moment of realising that I was capable of making timeless music - not just the music that's here and gone tomorrow," reflects Nadia.

As 2016 drew to a close, Nadia racked up a prominent feature on Kideko and George Kweli's house banger 'Crank It', which brought her main stage festival bookings around the world. She won a MOBO for the 'Skwod' video (beating competition from M.I.A. and Laura Mvula), and finished in the Top 5 of the BBC Sound of 2017 poll. At the top of 2017, she released her first EP, 'Highly Flammable', which The FADER called "a showcase of Rose's dexterity".

As well as holing up in the studio to compose a slew of new emotional bangers, Nadia also spent 2017 writing for Rihanna, who tapped her up to join her writing camp for #R9 in London. Having got in touch with her vulnerable side, and experienced what it's like to write for other artists, Nadia says she unlocked a "different level" in her songwriting - a few samples of which she unleashed in unofficial singles, like the low-slung 'On Top', in 2018.

Now, she's kicking off 2019 with a defiant, fresh statement of intent.
Her carefree tropical tune 'Airplane Mode' is all about those days where you have to block the rest of the world out, and get in your zone. "When I'm creating, I don't like things to infiltrate that," says Nadia. "One phone call can change my train of thought." When she describes the song, it takes on a deeper resonance, seeming to describe her approach to life and her career in general: sometimes you need to have tunnel vision, to take risks, and to take total control of your own destiny. As she puts it: "The main thing was just, 'I'm taking off, get out of my way! This is my thing, and this is how I'm doing it.' That's simply all it is. I'm taking off, you're either on board, or get out. I think that's a great motto to live by." 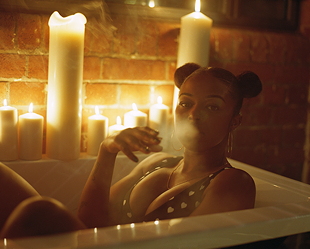