San Francisco born, London raised artist Natty is a treasured icon of the UK's music scene. Since exploding onto the scene in 2008 with his UK top 20 debut album 'Man Like I'. Natty and his band The Rebelship have been busy spreading his musical message all over the world.

Natty started in music as a sound engineer. After working in studios for 5 years with many groundbreaking artists (incl a platinum disc for Razorlight production) he went on to become a freelance producer whilst generating a huge buzz performing at open mic events around London. He was quickly spotted by Atlantic Records. He signed with them in 2008 and put out his first album, 'Man Like I'. Its success captivated the attention of the UK, and the rest of the world, the single 'Badman' was a number 1 hit in Japan. He was dubbed a "soul-reggae crossover sensation" by The Telegraph and has since continued to travel the world, playing countless festivals and entertaining a loyal and ever-growing fan base of people from all walks of life. Natty says: "The power of music is undeniable, and so bringing people joy and healing has been the driving force behind the music we make".

Performing on Later with Jools Holland, the ITV News and The BBC Electric Proms are amongst some of the TV highlights of Natty's career.
He was recently interviewed for Sky news and ITV did a piece on his latest tour, as well as featuring him on newsnight a few years ago.
Artist collaborations include work with Nitin Sawhney, Benjamin Zephaniah, Seun Kuti, Maverick Sabre, Roots Manuva, Tony Allen, Prince Fatty, Baba Maal, and Akala, which also led to touring with Ziggy Marley around USA, playing an unauthorised headline show in front of thousands in Khartoum, Sudan and performing in the U.N building (New York City) on World Humanitarian Day. Some of Natty's festival highlights include: Glastonbury, Boomtown, Bestival, Boardmasters, Garance Reggae Festival (France), Sierra Nevada (California), NH7 (India), Summersonic (Japan) plus others. Natty also produces his own live music events under the moniker Vibes and Pressure, which has also grown into an independent record label for the UK's growing roots music scene.

Aside from his musical career, Natty has done a bit of acting, has led an expedition into the amazon jungle, is in the process of writing a book and has spent much time writing, travelling, and meeting with spiritual leaders in Africa, Asia and The Americas, adding many branches to his creativity and character. He is heavily involved with an African-based charity erasefoundation.org, working in Gambia, Lesotho, Namibia and Sierra Leone, as well as working with disadvantaged young people in London.

Natty's appeal as a musically motivated yet accessible artist with an intelligent message is undeniable and has resulted in fans crying out for his next release, due out early-2020. His London swagger coupled with a rich musical heritage and understanding of the world is surely a recipe for a long and fruitful career. 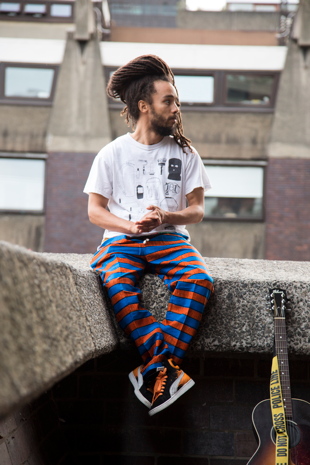