"we're not going to buy your respect; we're going to earn it"
- therhapsodymanifesto.com

All things considered, there's one thing that we can all agree on: it's time for something new. Welcome to the Odd World, where things happen.

The Odd World is a space where what is real and what is perceived to be real blend together, a creation of six united misfits to explain the experience of being Ocean Grove.

"'The Rhapsody Tapes' explores a fascination with a warped perception of reality," says Luke. "It tells parallel stories that come in waves.. and parts of the album are written from the view of a child standing on the edge, looking out into a hyperreality in search of something."

'The Rhapsody Tapes' was written and produced entirely by the band in Sam's bedroom, allowing Ocean Grove endless creative freedom. The album breathed itself out over a series of months and shows that dumping tens of thousands of dollars on expensive producers and studios is less effective than, well, having a preternaturally talented guy (who was just 19 at the time) in the band who can do everything.

Both a self-contained statement on and expression of what's inside their heads, 'The Rhapsody Tapes' - sonically and visually - was constructed in minute detail by the Ocean Grove collective, with no outside interference whatsoever. Every inch of the artwork, every note of music. Because that's how the Odd World grows: in the shadows, bravely.

"Although some of the themes we discuss are commonly touched upon by many artists, we hope to present our art in a way that is incongruous with most, and that is the theme that binds all these songs and topics together - Odd World," explains Dale. "We explore the nuances that come with that freedom and obscurity."

"let us come to a secret misunderstanding"
- therhapsodymanifesto.com

There was no moment of conception for Ocean Grove; at one point they didn't exist and then all of a sudden they did. With friendships within the band stretching back a decade-plus, they coagulated around shared ideas of art and performance and life. They grew together and treated every morsel of life as more fuel for their fire, expressed on two EPs, first 2013's 'Outsider' and then 2015's 'Black Label', the latter re-released in 2016 as the 'Sublime Edition' with the addition of breakout anthem 'Lights On Kind Of Lover'.

"The themes of our songs have transitioned throughout our releases just as we have transitioned from teenagers to young adults," says Dale. "We have always loved to harmonise as writers on how we feel about certain themes, whether it be relationships, individualism or troubling experiences." 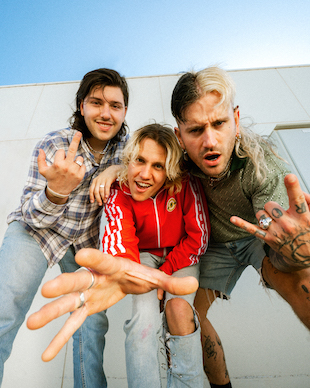