Odina's aesthetic is melancholic and sorrowful, yet brimming with warmth and delicacy. A project that began at a point of "exile" when moving to a different country -from sunny Catalonia to the rainy streets of London - Odina's minimalist approach attracted widespread critical acclaim with debut EP 'Broken' and subsequent singles in 2017, drawing comparisons to Joanna Newsom and Bon Iver and landing her a slot at Primavera Sound.

Recognised by critics as an artist to watch, to date Odina has received praise from Nylon, The 405, The Line of Best Fit, and Wonderland to name a few. Her mesmerizing sophomore EP 'Nothing Makes Sense', out now, was described by Clash as "a stirring, fascinating, intoxicating collection that firmly stamps out her identity".

Odina's dappled, plaintive songwriting and her exposed vulnerability evoke intimacy, each track like a whispered diary entry, synthesising the deeply personal and emotional with the warmth of Odina's delicate guitar accompaniment and reverb-filled production. The intimacy may come from the bedroom-like nature of her recordings, but mainly from her power to convey raw, unfiltered emotion. 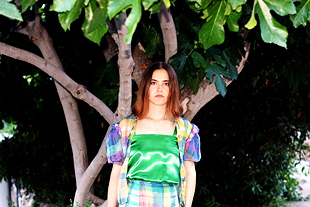