On Video are a four piece from East London. They make garage influenced guitar pop with an emphasis on hype and brevity.

2019 will see them release their debut EP 'Clap Trap', recorded at The Premises in Hackney and mixed by Rich Cooper (Mystery Jets, Temper Trap). They will also bring their energetic live show to venues and festivals across the UK. 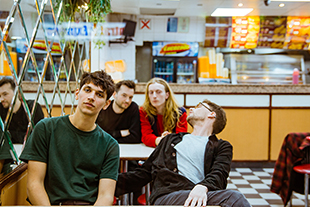