Full of energy and ambition, POLICE CAR COLLECTIVE feel like your older brother who shows you all the cool shit that nobody else is into yet. Citing Kanye West and groups like Beastie Boys as primary sources of inspiration, the duo are creating a sound uniquely their own, combining 90’s hip hop, 2000’s pop punk, and infectious pop hooks. This all comes to light on their new mixtape, “MONEY MACHINE!”, recorded in just two days in a dingy basement in Leeds. The duo, Frankie Beanie and Simon Quigley, set out to shatter anyones expectations of them as a band, and that shows, manifesting itself in a mixtape that clicks through an explosive range of tones. On “MONEY MACHINE!” the duo lets themselves loose, allowing themselves to emphasise messages that artists usually restrain to limit their discomfort. “We’re not hiding from what we’re trying to do.” says Beanie, “Pretending to be something we’re not is not something we’re very good at.” 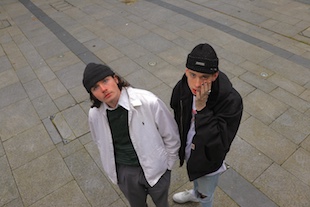