Within the butterfly-breaking cogs of the music industry, big numbers can bring big problems. And The Wombats' numbers got big, fast. A platinum album with their 2007 debut 'Guide To Love, Loss And Desperation'. Over 300,000 combined sales of their indie dancefloor smashes 'Kill The Director', 'Let's Dance To Joy Division' (winner of the 2008 NME Award for Best Dancefloor Filler), 'Backfire At The Disco' and 'Moving To New York'. A two year tour during which Liverpool's biggest exports in a decade played to well over a million people, culminating in a massive homecoming Liverpool Arena show for 10,000 ecstatic local fans of their dark yet exuberant and infectious alt.pop.

"It was such a good way to round it off," says drummer Dan Haggis. "We had a two day party after that. Obviously you can't help but go 'bloody hell, remember a couple of years ago in Liverpool, we'd be lucky if we sold out the Academy downstairs to 500 people. How did we get to this?'"

Big numbers, big gigs, but for a band with the intense work ethic of The Wombats (lest we forget, in the build-up to their breakthrough hit 'Kill The Director' in 2007 they played 50 tiny pub and club shows around the UK in almost as many days) they took their toll. Having continued their breakneck schedule for eighteen months solid, they came off a mammoth US tour in 2008 "pretty broken... physically and mentally."

"We did a couple of months too long," says Dan. "I had problems with my arms so every night going up onstage hurt, so it wasn't really that enjoyable. I had a gig where I didn't want anyone to look at me. I sat on the drums at Glasgow and you start feeling guilty because you think you should be having the best night of your life but I didn't know why I was there."

Over the summer of 2008, between festival dates, two more singles were recorded the stop-gap classic 'My Circuitboard City' and their sardonic (anti-)Christmas song 'Is This Christmas?' before singer Matthew 'Murph' Murphy sat down to begin writing new material for album two. But in his new home in London, Murph found the loneliness, dislocation and routine of being off the road and writing in a big city difficult to cope with. He'd simply become too accustomed to the adulation of the stage.

"My downfall was I got used to it," he admits, "and then when it all stopped it was a bit of a reality bite-back and I had to level myself out. It was my general unhappiness of not being on the road and being in a new city."

"Every night for a couple of years to have always been on your way somewhere," adds Dan, "always about to do a gig or an interview or whatever, always people interested in talking to you about music. Then suddenly stopping and not doing gigs and not having the adrenalin rush every night, it's like hitting a brick wall."

The few gigs that the band did play occasionally ended in near-death experiences. On his way home from a show in Skegness, Murph almost flipped his car on an icy motorway but emerged miraculously unscathed (the incident inspired a new song called 'Motorphobia'). And during a trip to Dubai to play Liverpool Sound City, Dan had his own four-wheeled run-in with the reaper.

"It was fun but me and my girlfriend almost had a pretty serious accident," he says. "We went dune buggy racing with no insurance, no anything. They just went 'have you done this before?' and we went 'no, not really' and they went 'great! Put this on!'. We stuck this helmet on and went off over these dunes having a great time and ended up going too fast over one of them and basically coming off and crashing quite badly."

With so much alienation and vehicular trauma around, it's perhaps no wonder the first batch of songs Murph wrote in London in February 2009 were delivered to the record label and met with some concern. Lyrically they were the bleakest tracks Murph had ever written (he doesn't expand on their subject matter) and musically they were heavier than heaven and louder than war.

"The initial thought was to do things relatively far away from what you'd be known for or what your comfort zone is," he says, "which is maybe a good thing, but the first batch of songs that the label heard, they were like 'who the hell is this?'"

Bassist Tord Overland-Knudsen chips in. "They were much grungier. More like the 90s grungy thing, for those first four songs. We needed to get the energy back, make heavier music."

Or, more accurately, Murph needed to get his Merseyside Mojo back. "I went back to my mum and dad's house to recapture whatever former glory was once there. It was kind of miserable being locked away in a room for eight hours every day with just a little lampshade and piano. You kind of go round the bend, there was no reality to draw from. So I had to go up to Liverpool and get back to getting slaughtered and doing recreational things in order to find anything to draw on."

Back in Liverpool, The Wombats Mk 2 instantly clicked. They plumped for a synthier sound, Murph's keyboard often replacing the lead guitar, and the tunes poured forth in ever more innovative and colourful guises.
Tracks such as 'Perfect Disease' took on the sonorous disco moods of Depeche Mode and Echo & The Bunnymen, lashed to The Killers' arena pop sensibilities. One of the album's "curveballs" 'Jump Into The Fog' came out sounding like nothing more than The Horrors covering Queen. Often only their intense catchiness marked these songs out as traditionally 'Wombats' at all: no matter where the sonics strayed, the tunes were always glint-in-the-sunlight perfect - better even than the dancefloor killers of their first chart onslaught.

"I felt like I was rebelling against what we were as a band," Murph explains. "Somehow we've come back round and amalgamated bits of that into the newer stuff and it'll hopefully make it better. There are elements that are so different from what people will think. There's songs that are akin to the first album but it feels like we've escalated. I'm 100 per cent certain that some of the songs on this album are the best we've ever put out."

First single 'Tokyo (Vampires And Wolves)' certainly fits that category an instant radio hit that's so insanely catchy it's impossible not to spin again the second it's finished. An ode to the Neon City? "It's just a bit angsty," says Murph. "The new album hasn't got anything to do with touring, it just represents escapism and wanting to run away."

This new batch of songs finds Murph's lyrics developing a depth and personal confessional slant that's rare in modern song-writing: take the blunt and startling theme of 'Anti-D' for starters, in which Murph likens himself to an anti-depressant. But fans of his more story-based writing will find much to enjoy in the synth-rock, disco-destroying brilliance of 'Techno Fan' the tune where 'Mr Brightside' chats up La Roux in a drug-swamped Hoxton dive bar. Key line: "I'm in debt to you/But don't feed me plant food".

"That's more of a story," Murph says. "I went to a minimal techno rave in Shoreditch with my girlfriend. It was dirty, I didn't stay there for long. I've never seen a longer queue for the toilets in my life. People had their hands up going 'I actually need a wee' and everyone in the queue would go 'go on then'."

The album has been recorded through 2010 over three sessions with separate producers, all in L.A. first U2 and R.E.M. producer Jacknife Lee brought his precise technological nous to 'Anti-D', then Eric Valentine helped them put together 'Tokyo (Vampires And Wolves)' and 'Techno Fan'. Muse knob-twiddler Rich Costey joined forces with additional creative input from TV On The Radio's Dave Sitek and John Hill (Santogold, M.I.A., Devo) to complete a record that will shock, impress and spin opinion on this most uncompromising of 21st Century pop bands. The resulting album, subsequently titled 'The Wombats proudly present... This Modern Glitch', even finds rooms for a guest appearance courtesy of Jane's Addiction guitarist Dave Navarro on 'Girls & Fast Cars'.

"You take the electro and you take the grunge and you put it together with what we used to do on the first album," says Tord, "then that's what the album's going to be."

Dan nods, a sparkle in his eye. "It's gonna be a whirlwind adventure."

Having entered the charts at #3, the album has provided three of the band's biggest airplay hits to date with its first singles 'Tokyo (Vampires & Wolves)', 'Jump Into The Fog' and 'Anti-D' as The Wombats subsequently become one of the stand-out names on this summer's festival circuit with headline sets at Lovebox and Wakestock as well as other major events including Glastonbury, V, Radio 1's Big Weekend and Rockness. Always a resolutely popular live band, both of their recent UK tours were entirely sold-out and included major London dates at the Brixton O2 Academy and the HMV Hammersmith Apollo. Having recently released the single '1996', The Wombats culminated a triumphant year with three special homecoming shows at Liverpool's O2 Academy with further major shows already confirmed for 2012. 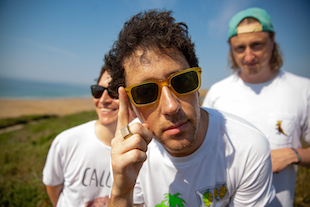