Singer-songwriter from the DMV living in Brooklyn,NY. Up until now he's kept most of what he's been working on a secret. rum.gold's music is best described as the selfish revolution of a wallflower. His voice is rich, delicate and carries an unfathomable beauty. There is a depth of melody and soul within his songs that is transcendent.His performances are intimate and honest. Left of center R&B, informed by the past but pushing the confines of different genres a bit. No boundaries. Unapologetic.

"rum.gold's vocals are so velvety that listening to him delicately sing each lyric almost feels hypnotic." - Complex

"Putting his own atmospheric spin on R&B and experimental pop music, rum.gold's introduction is a memorable one, and has us excited for what's next" - Pigeons & Planes

"rum.gold is special. With the ability to have his voice act as another instrument, he's well on his way to carving out a much-needed space for himself in the mainstream scene." - Hillydilly 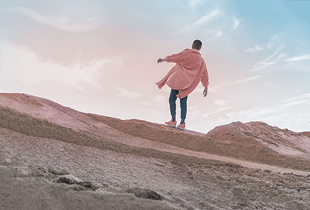