Maduk is one of the most promising new talents in the Drum & Bass scene. Fresh off winning the 'Best Newcomer Producer' award at the prestigious Drum & Bass Arena 2014 Awards, Maduk proves to have a worldwide range of support. With releases on labels such as Hospital, Viper, UKF, Fokuz, Allsorts and his own Liquicity Records (which he co- runs with fellow Dutchman, Maris Goudzwaard, this youngster is just getting started!

Maduk is also one half of the successful YouTube channel turned record label, Liquicity which has grown to build one of the largest communities of liquid drum & bass in the world and has played a key part in reaching new audiences for the smoother side of bass music over the past eight years.

Following the announcement of his exclusive signing to drum & bass empire Hospital Records, Maduk presents his debut release with the label, 'Not Alone' - an energetic three-piece set of dance-floor feelers that accelerate through vocal chop ups and piano lead melodies.
Here he has drawn from a number of local dutch talents with lively layered vocals from MVE & Frae and a collaboration on production with electro-house duo Duckfront.

Maduk quotes many Hospital Records artists as key inspirations so it's no surprise his collaboration with Logistics delivers; 'Solarize' shifts up the pitch, drops down the bass and reels out the drums for an infectious drum & bass roller. Finally 'Africa' - a track previously selected for Fred V & Grafix's popular 2015 'Hospital Mixtape' - which draws for gentle piano chords, brass horns, glimmering flute, subtle high-hats and looped vocal snippets showcasing Maduk's more mellow and melodic side.

"Exactly 4 years ago I made my first track as Maduk with a drumloop from Nu:Tone his sample pack. If you would have told me that I'ld work alongside him and the rest of the drum & bass masters at Hospital Records 4 years later, I would have never believed you. Joining Hospital feels as the perfect time and place to release my music!"
Maduk 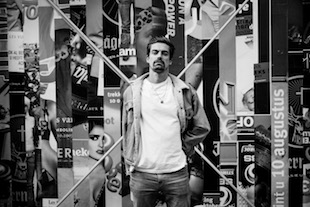