Sébastien Tellier, the Parisian master of chords and melody, whose identity might be found in the triangle between genius, eccentric and enigma, returns with his extraordinary new album. A concept set in a part-mythical Brazil, the music has an intense, sumptuous, sensual and cinematic edge. Its title is Portuguese but the meaning is universal: 'L'Aventura'.

"A record has to be an adventure in the head," Tellier claims.
"'L'Aventura' is the promise of sun, the mystery of the jungle..." 'L'Aventura' is equally what he describes as, "a reinvention of a childhood" - namely his own. "My job as an artist and a singer is to run away from reality. You cannot change the present or the future, so if you want to change reality, change the past."

Following albums where Tellier bravely embraced politics (2004's 'Politics'), sex (2008's 'Sexuality') and faith (2012's 'My God Is Blue'), 'L'Aventura' retains the tradition of Tellier concepts - not intellectual or polemical but mercurial and playful. "I always try to be naive, like a child, you can just say what you like or don't like!" he explains. "I try to explain many sensations about Brazil, but I am not a specialist. Maybe what I know best are Caipirinhas!"

But such concepts would mean little without the music, and on top of Tellier's usual command of Gallic pop and chanson, baroque and electronic, he adds exquisite Brazilian tones, specialising in tender, lingering melody. If you are unfamiliar with this man's music, now really is the time, as 'L'Aventura', his official sixth album (discounting soundtracks or compilations) is a new benchmark in Tellier's ambition to marry, "complex chords and complex melodies. But without the intellectual or boring side. Brazilian music is perfect for me as it's full of mysterious chords and strange melodies, but it's also light and sunny. I feel my previous albums were just tests to reach this point."

The album was mostly recorded in Paris and at Jean-Michel Jarre's studio - a holy grail for synthesiser fiends such as Tellier - outside the capital. But it was lovely expanded in Brazil, care of cult legend Arthur Verocai, who arranged all the album's strings, some of the backing vocals, and helped secured the services of some of Rio de Janeiro's premier musicians, such as percussionist Robertinho Silva. So 'L'Aventura' feels authentically Brazilian. There are homages to the sun, like 'Sous Les Rayons Du Soleil' (aka 'Under The Sun's Rays'), a slice of suave, uptempo pop suggests Tellier's late French compatriot Serge Gainsbourg streaked with tropical colour, while 'Aller Vers Le Soleil' (aka 'Go To The Sun') feeds off disco and synth-pop. But the record's heart is all Tellier. 'Ma Calypso' is equally sublimely Euro-mantic as calypso, just as 'Ambiance Rio' and 'L'Adulte' are unique twists on samba and cha-cha respectively.

Sung mostly in French, with occasional English and Italian phrases, Tellier broadens the vista with autobiographical detail. 'Ricky L'Adolescent' imagines a grown-up Tellier meeting his younger self: "I was a teenage rebel, full of hate and drugs, stuck in the suburbs with nothing to do, my head full of dreams - success, beautiful girls, cars... I am ashamed that it took a long time to change, to be gentle and respectful."

At 14 minutes, 'Comment Revoir Oursinet' is 'L'Aventura' magnificent, progressive centrepiece. Yet the "oursinet" in question is a stuffed animal... "We are taught in the West to be a real man, so it's forbidden to think about missing your teddy bear," he explains. "For me, the real power is to admit there is a little empty space in your life, to say, I am not an adult, but still a child."

If 'Comment Revoir Oursinet' is the album's greatest adventure, Tellier considers the dramatic finale 'L'Enfant Vert' (aka 'The Green Child'), "the real meaning of the record. I sing so much about Brazil, it's like I almost believe my childhood was spent there, a perfect, super-shiny childhood. But it's important to explain the reality, that this is not real."

The reality of Tellier's childhood was that his musician father wanted the same for Sébastien, giving him guitar / piano lessons and playing him records. Tellier says the first piece that, "made a deep impact," was Pink Floyd's 'Atom Heart Mother': "it was like a mass, the beginning of a wonderful adventure." Equally influential was French soundtrack specialist Francois de Roubaix, "a crazy and wonderful musician. I think it's impossible to hide my roots, they're in everything I do."

When he was 20 and a would-be professional musician, Tellier wrote down his ambitions in a book, and then began to realise them. He soon encountered France's electronic music elite: Record Makers released his 2001 debut album 'L'Incroyable Verite' (aka 'The Incredible Journey'): two of its most haunting moments - 'Fantino' and 'Universe' - ended up in films, respectively Sofia Coppola's 'Lost in Translation' and Daft Punk's 'Electroma'. And it was one half of Daft Punk, Guy-Man de Homem-Christo, who produced 'Sexuality'.

Celebrated as a national treasure at home, Tellier's adventurous and esoteric approach means he hasn't quite the global appeal of either Air or Daft Punk, though he did play to a global audience at the 2008 Eurovision Song Contest with 'Sexuality' synth-pop highlight 'Divine'. The fact he accepted the challenge to represent France indicates Tellier has a healthily ironic view of "cool". "Eurovision is not a real artist contest, more like a circus, but it was an opportunity to play in front of millions, 120 million I think! It was also a great pleasure, but I was so drunk, it's a strange memory!"

Tellier took to the stage that night in a golf cart, perhaps an unintended homage to one of his heroes, Spanish superstar Julio Iglesias - which perhaps shines a light on Tellier's image - part rogue, part playboy. "I dress like a character, to represent my music," he explains. "I like artists who do the same, like Iglesias, the seducer in the sun driving his little golf cart, which reminds me of the ambience of a relaxed life. A joint and pineapple juice is the perfect balance, non?"

After Eurovision - which unsurprisingly he didn't win - Tellier released the 2010 compilation 'Love Songs', which he followed with the, "soundtrack for a space movie" that was 'My God Is Blue' (produced by Mr Flash). "I am very proud of this album," he declares. "It's a message as well as music, cheesy but also serious. Don't forget to have a spiritual side to life."

Tellier's 2013 album 'Confection' had spiritual dimensions too, being inspired by the death of his beloved grandmother ("her body goes to the hearse, but her soul flies to the sky, a little butterfly") and a new soundtrack, "but the movie was so bad, I kept my music and it became part of this record."

Now it's the turn of 'L'Aventura', and a new tour, combining new songs with, "putting a new perfume on old songs," including Tellier's signature classic 'La Ritournelle' (a popular request at French weddings), which debuted on 'Politics' and lives on through multiple versions, including a superb Metronomy remix.

Tellier: "I want to play all the little versions that are so sweet, but also to create something super-powerful, boom boom boom! To twist my dream, with deep sensations."

This is as good a way as any to describe 'L'Aventura''s dynamic beauty. Sweet, powerful, deeply sensational. And a brilliant adventure. Let the inimitable Sébastien Tellier be your guide. 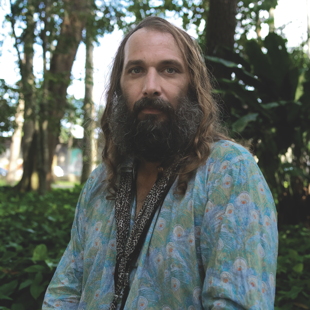