Herein bumps and soars 'Lese Majesty', the new sonic action of Shabazz Palaces. Honed and primal, chromed and primo. A unique and glorified offering into our ever-uniforming musical soundscape. 'Lese Majesty' is a beatific war cry, born of a spell, acknowledging that sophistication and the instinctual are not at odds; Indeed an undoing of the lie of their disparate natures.

'Lese Majesty' is not a launching pad for the group's fan base increasing propaganda. It is a series of astral suites, recorded happenings, shared. A dare to dive deep into Shabazz Palaces sounds, vibrations unfettered. A dope-hex thrown from the compartments that have artificially contained us all and hindered our sublime collusion.

These reveries were sent to Palaceer Lazaro and Fly Guy 'Dai in the year of gun beat battles in excess; In a succession of days, whilst walking in dreams and in varied transcendental states.. (every minute of every day is filled with observation and composition. In action). Songs are committed and gathered by robots at Protect and Exalt Labs, a Black Space in Seattle, Washington.

The visual features of 'Lese Majesty' are resultant of the gleanings of fellow Constellationaire, Nep Sidhu.

The Black Constellation squads up, protects and exalts the messages within, and colludes accordingly. We thank you. 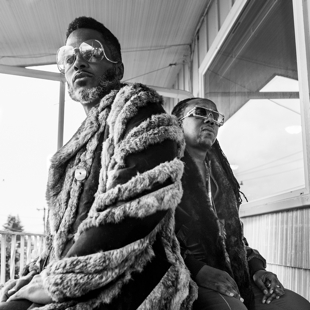