Formerly known as Section Boyz, Smoke Boys are a U.K. rap collective from South London. The group are known for their 2018 mixtape, 'Don't Panic II'. Made up of members Knine, Inch, Deepee, Sleeks, Littlez, and Swift, they made their first appearance on the U.K. urban scene after independently releasing their first mixtape 'Sectionly' in 2014. They swiftly followed that with sophomore effort 'Don't Panic' in 2015 before going on to win the Best Newcomer Award at the 2015 MOBO ceremony. The next two years saw them appearing on tracks by artists such as TE Dness and Starboy. 2016 saw their return, having reinvented themselves as Smoke Boys and issued the 'Delete My Number' EP.

Throughout 2017, the group worked on their third full-length mixtape. The release, 'Don't Panic II', arrived in 2018 and marked a sonic departure from previous efforts, moving slightly away from the U.S. trap influence and incorporating more melodic vocal melodies over kinetic beats and hazy synth bass. The tape featured guest appearances from the likes of Headie One, Belly Squad, and D-Block Europe.
Rob Wacey, Rovi 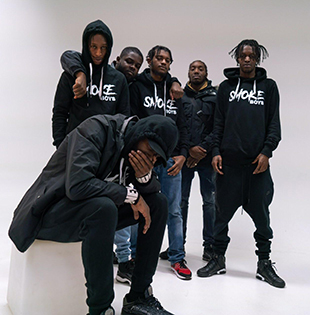