The Bots are band-mates Mikaiah Lei (Lead Vocal, Guitar, Bass) and (Drums & Percussion, Backing Vocal). They recorded their first album together when they were just 15 and 12, respectively. They self-released their first three EPs and completed two Vans Warped Tours, countless European festivals, and support tours with Yeah Yeah Yeahs, Blur, Refused and Bad Brains, among others. This was all before releasing their EP, 'Sincerely Sorry', on FADER Label in 2013, which spurred The New York Times to predict, "They are on the cusp of stardom."

The Bots' debut full-length album, 'Pink Palms', was released in October 2014 via FADER Label. The album was recorded in Los Angeles and produced by Justin Warfield and Yeah Yeah Yeah's Nick Zinner. The Los Angeles Times premiered the record and called it "a mash of frenetic garage rock and lush indie rock." Zane Lowe premiered the first single, 'All I Really Want', on his BBC Radio 1 show, proclaiming, "The Bots make brilliant, weird rock & roll music. And the future - a big part of it - belongs to them." NPR Music called the song "an absolute knockout" and the album full of "playful catchy songs that rock hard."

2014 saw The Bots make their debut at Coachella, where they were deemed "Most Likely to Succeed" by Rolling Stone and named "one of the best young bands at Coachella" by Creative Loafing. The band also played Bonnaroo, Outside Lands, Riotfest, supported Dropkick Murphys on a run of US dates, and toured the world quickly gaining them a reputation as one of the best young touring bands in the country. They've already kicked off 2015 in winning fashion with their being named "L.A.'s most celebrated rock duo" by LA Weekly and featured in Interview Magazine's "15 Faces of 2015". They made their national TV debut on 'Late Night with Seth Meyers', in February 2015, performing their single 'Blinded'. 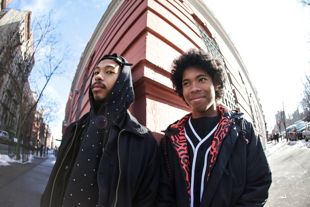