The D.O.T. is the new musical project from Mike Skinner of The Streets and Rob Harvey of The Music.

After spending the year creating music and video art online, including some of the most cinematic monthly video diaries you will ever see, Mike and Rob finally feel ready to release an album.

From the Trap infused single 'You Never Asked' feat Clare Maguire and Danny Brown to dance tent smash 'And a Hero' by way of rock led plaintive ballads such as 'Where Did I Go' this is the sound of two incredible musicians at the height of their craft making music out of love for it.
The sole motivation when making this record was simply to make great songs with no compromise. They have made songs big enough to fill arenas.

In case you've been living under a rock for ten years Mike Skinner was the man behind multi award-winning act The Streets who changed the face of modern British music at the beginning of the noughties and he has been pushing things forward ever since. Rob Harvey was previously of cult dance rockers The Music who built up a huge and loyal following in their ten years of making music. Rob and Mike have been friends for years but they had never made music together until a one off session was put together, they instantly clicked and The D.O.T. was formed. Mike brings his incredible production nous and dead pan backing vocals which perfectly augments Rob's stadium sized vocals and soulful guitar. They both get very uncomfortable when you ask them what The D.O.T. stands for.

Already a huge success in Japan where their first festival appearance was greeted by 7000's fans, the band are now turning their attentions to the UK with a tour in place for October. 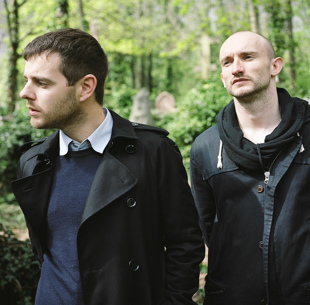