Tony Hadley, the eldest son of Josephine and Patrick, was born at The Royal Free Hospital, Islington, London on 2 June 1960. Tony attended Dame Alice Owen's Grammar School and thought his future lay in medicine but, after winning a holiday singing competition, decided that his vocation was as a singer the rest is history

Pioneers of the 80s Romantic movement, Spandau Ballet formed in 1978 and had numerous chart topping singles and albums all over the world, some of the most memorable being the singles 'Gold' , 'Only When You Leave', 'Lifeline', the epic 'Through the Barricades' and of course the international number one 'True'; the latter famously sampled by PM Dawn in 1991 and featured on Paul Anka's 'Rock Swings' in 2005.

By the mid-80s they were world-wide superstars, however, relationships cracked and the band split in 1990. However they reformed in 2009 for the 'Reformation Tour', a worldwide tour that included three sell-out nights at London's O2 and their first festival date at The Isle of Wight Festival.

In 2014 the band were all together again for the launch of their critically acclaimed rockumentary 'Soulboys of The Western World', which quickly became the #2 grossing film in the country and united critics from the UK broadsheets to USA's Rolling Stone in their acclaim. The archive-only feature documentary combines newsreel footage of the time with unseen video from the band's home movies, along with long lost material newly discovered.

With the enormous success of the film the band announced their 'Soulboys of the Western World' world tour which kicked-off in January 2015 for 9 months playing at some of the biggest venues and events including the Singapore Grand Prix. The band also played in America for the first time in 30 years.

As lead singer of Spandau Ballet, Tony Hadley has, over the years, earned the accolade of being one of pop music's greatest vocalists. In addition to all the band's songs, many will remember his prominent vocal contribution to the Band Aid UK charity single 'Do They Know It's Christmas' and subsequent 1985 London appearance at Live Aid.
He also performed solo at the Nelson Mandela Concert at Wembley in June 1988.

Turning the page on Spandau Ballet (after they disbanded in 1990), Tony stuck to the same raw instincts that brought him early success. Tony is a solo artist in his own right who has spent the past twenty five years entertaining audiences all over the world with his stunning rich voice that has lost none of its power, and which critics deem to be better than ever.

He has continued to write and record, and to date has released five solo studio albums; 'State of Play' on EMI Records, two albums through Universal Records, a self-titled album in 1998, and 'True Ballads' in 2003. In 2006, on his own label, Slipstream Records, he released his long-awaited swing album 'Passing Strangers'. He has also released three live albums, two live DVDs and has had European success with several dance music collaborations.

December 2015 saw his first ever 'Christmas' album released on Universal Records, with the first single , a cover of the American rock band Train's 'Shake Up Christmas'; one of Tony's personal favourites.

This year, 2016, will not only see a follow up to 'TheChristmas Album' but also a new solo album.

On the live music front Tony is a regular performer, delighting audiences at home and abroad with such events as the 'Night Of The Proms' in Holland & Belgium, orchestral tours of Europe and South America, as well as his own UK & European solo tours.

In 2005 Tony's contribution to the music industry was officially recognised with the award of a Gold Badge from the British Academy of Composers and Songwriters.

In 2007 he won a new legion of fans following his critically acclaimed performance as Billy Flynn in 'Chicago' on the West End stage. Tony's appearances in the show gave the musical one of its most successful runs ever and earned him an invitation to perform in the 10th Anniversary Show in 2008.

In August 2011 he played his first solo shows in the US, performing Spandau Ballet songs there for the first time since 1986.

In 2013 Tony played the first of a series of sell-out Orchestra shows which culminated in a performance at London's Royal Albert Hall. In October 2016 he returns there once again with his band and orchestra.

A PASSION FOR SWING

Aside from his own live band, Tony also has a passion for 'Swing'; Frank Sinatra, Tony Bennett and Jack Jones being just a few of his personal favourites, which has led to performances with some of the greatest jazz orchestras in Europe, including London, Holland, Italy and Spain.
In 2006 he released his long-awaited swing album 'Passing Strangers'.
It was a personal project that had been months in the planning and truly reflects his passion for swing. The album features some of his favourite songs and was released to coincide with Tony's first 'UK Swing' tour, aptly-named 'Swinging True'.

As well as the conventional shows Tony has played some extremely unusual venues for British, NATO and UN Troops on active service in Bosnia, Kosovo, Kuwait, Cyprus, the Falkland Islands and Northern Ireland. From aircraft hangers & tank workshops to bombed-out theatres & derelict sports halls to name but a few, Tony felt it was a real honour to give something back and be asked to entertain our troops.

Tony's talents as an artist extend beyond the stage and in recent years his profile increased dramatically in the UK. His participation in the UK reality TV show 'Reborn In The USA', which saw him travelling across The US in a tour bus with eight other British artists, eventually won him the public vote and the overall crown.

He is a successful Radio DJ, firstly at Virgin Radio and now Absolute Radio and brings his own brand of chat and music to the national airwaves every Saturday night. Tony is currently working on his own radio show to be syndicated around the world.

In May 2004 Macmillan Books released Tony's autobiography 'To Cut A Long Story Short'. The book charted Tony's youth, his early days in the school band, and the heady heights of worldwide super stardom as lead singer of Spandau Ballet. The book was a popular success entering the Sunday Times Top Ten bestsellers chart.

Tony is a regular supporter of charitable causes and enjoys donating his time and voice to help raise funds and awareness.
As Vice-President of Shooting Star CHASE Children's Hospices he has worked and performed annually at their fund raising events over the past 12 years.
Tony also has a major involvement with Action Medical Research, participating in their treks to Machu Picchu, The Lost World (Venezuela) and in 2009 the Eden Trek, trekking from the Pacific to Caribbean coasts in Costa Rica, resulting in a huge sum of money being raised for the charity's 'Touching Tiny Lives' campaign, looking at research into and help for premature birth. Each Autumn, Tony hosts his own celebrity golf day to raise money for this charity.

In June 2010 Tony began his year as President of TRIC, the Television & Radio Industry Club. Established in 1931, TRIC is an organization that aims to promote mutual understanding and goodwill amongst those engaged in the audio, visual, communications and allied industries. Tony took over from the TV Presenter, Sian Williams. TRIC has an unrivalled track record of charitable support with its members channeling their energies and using their influential contacts to benefit good causes.

Tony spends a great part of his year travelling away so time at home and with his local community is very precious to him. With his family, he can often be seen in a local pub or restaurant, supporting community events or enjoying himself on his ride on lawn mower.
As father of five children, Tony likes to keep fit and keep up with the kids!!
He regularly runs and exercises, loves his annual ski holiday and savours scuba and water skiing in the summer.
One of his biggest passions is football - he's a regular at all the Arsenal matches - and plays for Arsenal ex-Professional and Celebrity XI team whenever he can. His speciality is the own goal!

Two of Tony's highlights in 2012 were when he performed at the Royal Albert Hall. Firstly in front of The Duke & Duchess of Cambridge in the 'Our Greatest Team Rises' spectacular, to promote and raise funds for Team GB and then again a couple of week's later as a guest of Dionne Warwick to support The Hunger Project.
Tony was also very proud to perform at Team GB House for both our Olympic and Paralympic athletes on the 'Closing Ceremony' nights with 'Gold' becoming the unofficial Athletes song.

2014 saw Tony and his Spandau Ballet bandmates premiere 'Soul Boys of The Western World', at SXSW in Texas where the band performed their first concert in North America since 1985. The UK premiere combined with a mini-gig at The Royal Albert Hall sold out and was an exciting evening for them all.

Tony had the great honour to be invited to Buckingham Palace to meet HM The Queen. He says:

"It was a great honour in my role as Vice President for Shooting Star Chase to be invited to Buckingham Palace by HM The Queen. It was a privilege to be presented to Her Majesty and acknowledge and celebrate the wonderful work of our Royal Patron HRH The Countess of Wessex".

Shooting Star Chase Children's Hospice Care makes a true and significant difference to the lives of families caring for children with life-limiting and terminal illness, creating some wonderful and lasting memories for the families who need the vital lifeline of their care service.

In November 2015 Tony surprised fans by entering "the jungle" in ITV's 'I'm A Celebrity Get Me Out Of Here!'.
Tony had always been a fan of the show and was keen to "have a go" and see what it was really like. He enjoyed his time in and made it through to the final 6. This particular series of the show was full of controversy and at times very unpleasant for the viewers as well as the participants, but Tony kept his cool as always and was the consummate gent.

Most recently Tony has recorded a new song with Gary Barlow for the soundtrack of the 2016 movie 'Eddie The Eagle' starring Hugh Jackman.
The film details the inspiring exploits of Michael Edwards, better known as 'Eddie the Eagle', the most famous ski jumper in British history.

This year Tony is back doing what he loves best being a solo artist and will be performing extensively through out the year. 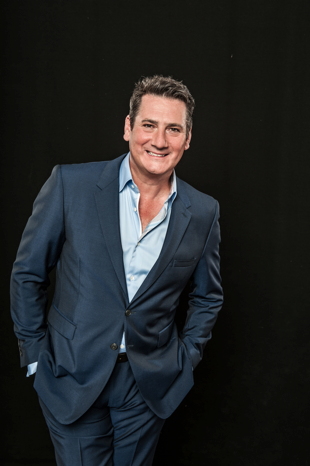