In this day and age, a record that defies you to spot what music its makers have been listening to is a rare beast especially one that makes you dance and sing as well. The fact they're still so young and, by definition, inexperienced - makes it even more extraordinary. Northern Ireland's Two Door Cinema Club are a music-mad trio and their debut album 'Tourist History' - fizzes with invention and sparkling tunes. It's undeniably pop, and it draws on electronica/electro and rock without ever recalling hopeful dilettantes, but the sum is greater than any 'indie electro pop' parts. The album also re-defines short, sharp and sweet - 10 songs, 32 minutes and no wastage whatsoever as classic debut albums should be. And they're signed to fab French independent Kitsuné 'nuff said.

Their story begins with three 15-year olds at school in Bangor, Northern Ireland. Vocalist/ guitarist Alex Trimble and bassist Kevin Baird studied music together; guitarist Sam Halliday was a mate of Alex's. They initially bonded over a love of Scots rockers Biffy Clyro, and formed an emo-styled rock band with a drummer, but he left and the remaining three realised, says Kev, "We were playing music that we weren't enjoying, so we said 'let's write some songs, without any pretence of what they'll sound like'. That's why we find it so hard now if people now ask us what genre we are."

Experimenting included using a laptop to generate beats. "It was born of necessity at first because we didn't know any other drummers," says Alex. "We weren't sure it would work but it did." They have now enlisted a drummer to beef up their live shows. Their name was a happy accident. A few days after they'd all visited The Tudor Cinema, which specialised in '50s/'60s B movies, Sam suggested Two Door Cinema Club, which the others thought was really cool. "We asked him how he came up with the name," Kev recalls, "and it turned out he thought 'Tudor' was pronounced two-door'!"

By this point, the boys' tastes had gravitated toward alt.pop, such as Death Cab For Cutie, Architecture In Helsinki, Bloc Party and Modest Mouse, whose collectively leaner, rhythmic and melodic approach spilled over into their own music. Gigs were quickly secured on the back of two songs (neither of which they play anymore) posted to MySpace, followed by a deal with Kitsuné, the release of their debut single 'Something Good Can Work' in March '09, and immediate support from radio (especially Radio 1's Steve Lamacq).

The album simply multiplies the single's surfeit of ideas and sounds. Take the opening 'Cigarettes In The Theatre', which instantly nails the band's light-footed, but hard-driving, energy. It begins with an ambient rumble, then adds a niggling guitar (or it could be a synth) line, which develops a siren-like insistence over a nervy beat pattern before a telling pause and a newer, deliciously almost deliriously - danceable song kicks in. The icing is Alex's vocal melody, with its almost dreamy brand of urgency, and his bare-boned narrative of meeting his last girlfriend ("We'll pass the burning light / we'll just keep talking on / tell me your favourite things"). And then there's the exhilarating trumpet coda. Brilliant.

It's followed by 'Come Back Home', a sequel of sorts; witness an introductory bed of woozy synths that build to a launching pad for a digi-funk backdrop that bounces, swings AND rocks behind Alex's confession that the aforementioned relationship is over ("Another Saturday, another careless move tells the world that you're thinking of what to do / a window opens up and someone calls your name/ but I can tell you don't know how to play this game / I know this isn't it"). "I like things to correlate musically but also lyrically," says Alex. The album, he explains, has two general themes 'love' songs ("but not in a typical sense; I'm adamant about avoiding clichés") and songs that chart, "our progression over this past 18 months. Where we've come from to where we are now with this album."

'Undercover Martyn' is one of the 'band' songs, based on a fictional secret, "who's got this big job to do but he's too scared. It's what we were trying to do, to build up courage to do this full time rather than go to university." The seeds of doubt are expressed in 'What You Know', 'I Can Talk' and 'You're So Stubborn', which are loosely linked by the theme of arguments and justifying what you believe in. The trio were faced with choosing between the security of university/potential career and the uncertainty and thrill of the band; we all know which won out, but 'Something Good Will Work' is a self-explanatory lyric by Alex to the other two, likewise 'Do You Want It All?', "a song of hope, to keep us going, with the thought that if we try hard enough, then we're gonna do well."

'Do You Want It All' also shows the subtler side of TDCC despite the high bpm and the escalating switch into an exhilarating sprint, led by Sam's dizzy, brilliantly simple guitar. "He's a massively versatile guitar player," Alex says of TDCC's more interview-shy member. "He has a great ear for what sounds good, and incorporates a lot of different styles, which provides a nice variation throughout songs."

The only constant between songs is the length of them namely, short. The songs average out at a pop-perfect 3 mins 20 secs each. Says Kev, "We've never seen the point of adding something on to make the song longer. Or to cram in lots of songs. We just wanted a really impressive first album, where every song could be someone's favourite."

From the lilt of 'Something Good Can Work' (imagine Vampire Weekend with an acute pop sensibility) to the smooth/jittery combo of 'Eat That Up It's Good For You' [about the rise of women emulating men's worst boozing-and-cruising habits: "that's me venting my anger, in a happy pop song," Alex grins), there are TDCC favourites all over the shop. If they can make such a mature album this early on, think of what they can do next time and the next album after that. Eat it up, it's good for you... 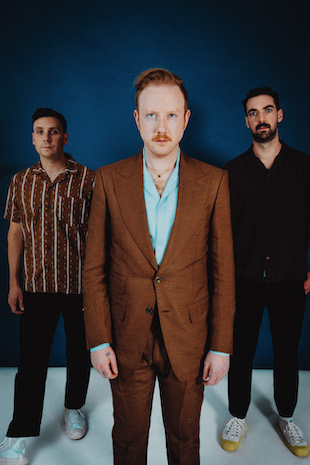