YACHT (an acronym for "Young Americans Challenging High Technology") is Claire L. Evans, Jona Bechtolt, and Rob Kieswetter. For their latest LP, 'Chain Tripping', the trio invented their own working method at the intersection of DIY and high-tech: they used neural networks to generate raw musical data from their prior work, which they arranged into new songs that they then learned, performed, and recorded live. Rather than rely on a single tool, they brought together several distinct AI processes: text generation (Char-RNN), latent space interpolation, raw audio generation (SampleRNN), and a "neural synthesizer" called the NSynth. They were inspired by the long history of generative composition, from William S. Burroughs' cut-up writing to David Bowie's custom 'Verbasizer' software from the '90s.

Using the framework of this album, YACHT was able to unite a disparate group of artists from around the world to showcase the state of the art in AI-assisted typography, lyrics, composition, audio, video, instrumentation, and photography. Collaborators include artist Ross Goodwin, "neurographer" Mario Klingemann, programmer and poet Allison Parrish, senior research scientists at Google's Magenta Project, and the New Zealand-based visual artist Tom White, who used an AI "perception engine" to create a suite of screen-printed computer abstractions for 'Chain Tripping'.

"All of this experimentation would be meaningless if it didn't result in something larger than the sum of its parts," explains YACHT. "This album challenged us in unexpected ways, opened new dialogues, and ultimately touches something deep about who we are. This is what technology can do it if it's wielded with love, in a spirit of self-discovery. This is what artificial intelligence can be if we think of it not as an endgame but as a starting point."

"big, clever, fun and a worthy addition to the DFA catalogue." - Mixmag 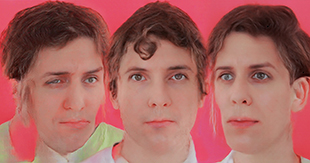