Youngblood Brass Band flouts convention in an ecstatic, raucous, incendiary fashion, taking the form of a New Orleans brass band and morphing it into a punked-out hip-hop behemoth of groove and purpose.

The ten-member ensemble, born in Madison, Wisconsin, now hails from all over the US (Madison, Brooklyn, Nashville, Minneapolis, Chicago) and has been unleashing their crash course in genre-bending on stages worldwide since 2000. What other band can claim the honor of having their music spun by DJs like Questlove (of The Roots), working with hip-hop luminaries like Talib Kweli, having their original compositions performed by student marching bands and jazz ensembles around the globe, and still not be out of place at a punk festival? What other band brings together the ostensibly disparate worlds of the trombone geek and the backpack b-boy?

Youngblood has headlined countless tours in the States and abroad, selling out dates in over 20 countries. Their festival resume reads like a list of the heaviest music events in the world: Roskilde, Glastonbury, Lowlands, Pukkelpop, SXSW, CMJ, North Sea Jazz, WOMAD...ad infinitum. White-hot live shows secured the band's status as an incredible group to witness, whether in an intimate club setting or in front of thousands on a festival stage.

Youngblood released two more albums on their own Layered Music imprint: 'Live. Places.' (2005) and 'Is That a Riot?' (2007), both of which accelerated their notoriety as the world's preeminent live brass band.
YBB also continued engaging in frequent educational work, stopping at high schools and universities to offer workshops on New Orleans music history, jazz improvisation, hip-hop culture and the creative impulse. It is through this work that Youngblood acquired cult status among young musicians. Perhaps the world secretly desires a music that is intense, danceable, intelligent, and devoid of the self-consciously vain irony that prevails in most current entertainment. Perhaps there is also something to be said for just quality musicianship, over-delivering on stage, and sticking to one's guns regardless of what's currently fashionable.

Youngblood's new album (the first in 5 years), 'Pax Volumi', sees the band partnering with Tru Thoughts, the Brighton UK label that includes a roster ranging from deep soul (Alice Russell) to hip-hop (Ty) to straight-up New Orleans brass band (Hot 8), and the pairing couldn't be more apt. This album sees the band finally achieving not just its musical but its production aims, capturing the live intensity of the stage as well as crafting beats and rhymes that bang right out of the speakers. It's almost as if they spent the last 15 years getting ready to become THIS Youngblood Brass Band; as though everything in the past had led up to the creation of an album that defies classification, an album that couldn't be made by any other group. On stages in the states and overseas, the verdict has been issued: the band has never sounded so good.

Whichever it is... the roof-tearing shows, the educational aims, the small town roots, the no-smirks honesty, the fist-pumping anthems for cool kids and geeks alike, Youngblood Brass Band has become an institution, one that demands to be seen and heard. Rigorous dancing is also acceptable. 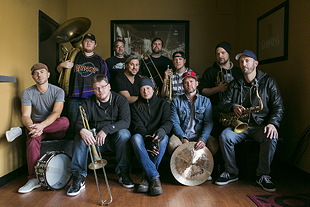