Throughout a catalog streamed nearly half-a-billion times and highlighted by two gold albums, two gold singles, and a platinum single, All Time Low perennially raised the bar for both pop and punk. Since 2003, the group notched five straight Top 10 entries on the Billboard Top 200, spanning the gold-certified Nothing Personal [2009], Dirty Work [2011], Future Hearts [2015], and Last Young Renegade [2017]. The latter attracted tastemaker acclaim from the likes of Rolling Stone, Paste, and more as the band canvased the world, headlining arenas on three continents.

2019 saw them celebrate Nothing Personal with a string of sold-out shows and a re-recorded live performance of the album at RedBull Studios. The record’s influence remained prevalent with Rock Sound citing its impact on Fall Out Boy, 5 Seconds of Summer, and more. Along the way, they achieved honors such as “Album of the Year” at both the Alternative Press Music Awards for Dirty Work and Rock Sound Awards for Last Young Renegade.

After nearly two decades together, All Time Low rekindled the spark they first ignited in a Baltimore basement on their 2020 eighth full-length studio album, Wake Up, Sunshine [Fueled By Ramen].

These four lifelong friends—Alex Gaskarth [lead vocals, guitar], Jack Barakat [lead guitar, backing vocals], Zack Merrick [bass, backing vocals], and Rian Dawson [drums]—walked into a tiny room, plugged in, and turned up with the same spirit, but a little more wisdom, a lot more experience, and proficiency gained by performing to millions worldwide. As a result, they delivered a dynamic body of work at the apex of pop punk prowess, rock energy, and genre-busting adventurousness. 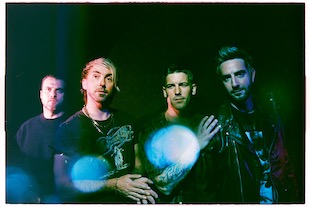