altopalo is the hive-minded project of Rahm Silverglade, Mike Haldeman, Dillon Treacy, and Jesse Bielenberg. The group met in New York and have spent the few years writing, recording, touring and making music with and around one another.

Individually the members have played live with Moses Sumney, Amber Mark, Kevin Garrett and beyond. 2018 marks the beginning of the release of their debut album 'frozenthere'. The project spans across, rock, indie, soul, funk, and electronic soundscapes while remaining cohesive through the writing and production tendencies of the group.

Already garnering support from Pitchfork, Consequence of Sound, DIY Magazine and Spotify, altopalo are making waves on their own terms. 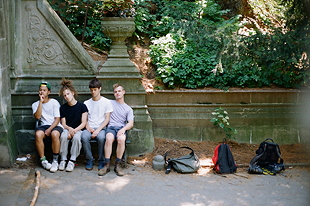