Belako are Josu Ximun Billelabeitia, Lore Nekane Billelabeitia, Lander Zalakain and Cristina Lizarraga. This band from Mungia has kicked ass in the last two years playing non-stop around Spain and Europe. Anything can happen on the stage... Power, electricity, punk attitude... Like the bands of the 80's.

In 2012 they won Radio3 and Gaztea awards. In 2015 they won Rolling Stone's and MIN Music Independent's "best new band" awards. In 2016 they won the RNE's (Spanish National Radio) 'Best Modern Music Band' award and in 2017 they came to win the Best Live Award in both MIN and The Iberian Music Awards. 2018 is also being a good year, they have won MIN's Best Band, Best Live and Best Video Clip (for 'Render Me Numb').

Their first full-length release in 2013, 'EURIE', was the catalyst of their success, and this success has continued with 2 EPs, released by their own label, Belako Rekords.

'AAAA!!!!' (June of 2014) is the wildest BELAKO. Home recorded, they wanted the sound of Nirvana, The Clash, The Cure, Pixies and Sonic Youth.

'BELE BELTZAK BAINO EZ' (June of 2014) has a modern sound, recorded in MusicBox Studios. In 2016, they released their second full-length album under their own label 'HAMEN'. In 2018 they released 'RENDER ME NUMB, TRIVIAL VIOLENCE'. 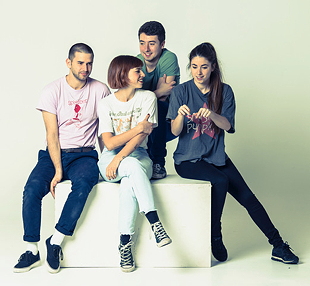