The band embodies the restless mojo of rock n' roll's timeless past and the adventurous mind-expansion of music's most dangerous outliers.
'CROWN THE EMPIRE' carry a reputation for a mixture of grimy rock urgency, anthemic choruses, and post-metalcore power but they refuse to standstill. Evolution and adaptation are paramount, driven by the same youthful fire that first inspired them to create visceral music videos before they'd even played live.

This band takes as many imaginative cues from cinematic storytelling and prestigious serialized television as they've drawn from Linkin Park, Slipknot, and My Chemical Romance, injecting ambitious theatricality into what they do. 'Sudden Sky' demonstrates a continued challenge to the norms of their chosen subgenre, eschewing formulaic convention for courageous creative renewal.

"We don't ever want to fall into complacency or be consumed by the lifestyle that comes with touring," explains vocalist Andy Leo.
"Behind the scenes, it was getting a bit cluttered. 'Sudden Sky' is about rekindling that hunger. We realized we had to reassert control. It feels liberating, exciting, and authentic."

Since their 2010 inception in the heavy music subculture of Dallas, Texas, 'CROWN THE EMPIRE' has built a revered catalog and a cadre of dedicated fans through collaborative experimentation across three acclaimed albums unleashed in rapid succession: 'The Fallout' (2012), 'The Resistance: Rise of the Runaways' (2014), and 'Retrograde' (2016). 'Sudden Sky' sees the foursome fiercely in control of their own artistic destiny like never before, with an unprecedented hands-on approach to their songs and overall aesthetic.

Heralded as 'Best Breakthrough Band' by Alternative Press, 'CROWN THE EMPIRE' have since earned praise as "thrilling," "dynamic," and "progressive," in tastemaker genre publications like Rock Sound, Kerrang!, and Outburn.

A staple of the Vans Warped Tour and major festivals; tour mates with Asking Alexandria and Black Veil Brides; and a celebrated headliner in clubs and theaters around the globe, 'CROWN THE EMPIRE' maintain an emphasis on showmanship and connective presence, fusing their energy with the crowd.

What began as high-school friends posting clips on YouTube has grown to over 70 million views on the platform alone; continued streams of songs like 'Machines', 'Are You Coming With Me?' and 'Voices'; and several Billboard 200 accomplishments, including a Number 1 debut on the Top Rock Charts.

"We had so much momentum. But life will hit you with inevitable twists, turns, and struggle. We're not kids anymore," Leo says.
"The music reflects where we are in our lives, the things we're worried about. There is so much heart put into every one of our songs. That will always be essential to what we do."

'Sudden Sky' combines the gutsy diversity of 'Retrograde' with the brash audacity of the first two albums, reflecting the band's greatest strengths through a prism of forward thinking ambition capable of sustaining 'CROWN THE EMPIRE' for years to come. "We've arrived at a refreshing place," Leo says with enthusiasm. "Mixing and blending everything we've picked up along the way musically with the things that attracted people to us in the first place."

Longtime fans and newcomers alike filled YouTube with ecstatic comments (something too rare on the platform) within hours of the release of 'MZRY' as song that's about as "classic 'CROWN THE EMPIRE'" as one can imagine. On the other end of the spectrum from the similarly well received '20/20', 'Under the Skin' is an introspective conversation of sorts, raw, personal, and real.
'Sequ3nce' is super-aggressive, with a lyrical rallying cry to escape from bad situations. 'Blurry' is about getting caught up in the haze of busied routines, something Leo knows a lot about, having toured tirelessly since he was 17. It grapples with the yearning for a sense of belonging, a tribe to call home.

"A lot of the songs are about saving yourself. Changing how you react to problems. Overall the album is a call to radically shake yourself up," Leo says.

At a natural career cycle impasse that will make or break a band, particularly one that enjoyed a tangible massive buzz and social media following from the start, 'CROWN THE EMPIRE' rise to the occasion, with an urgent, definitive sonic statement destined to carry them through another decade and beyond.

Focused and determined like never before the band is quick to point out that they still haven't forsaken the party. The music is celebratory catharsis, shifting from introspective exorcisms to uninhibited revelry with relative ease. 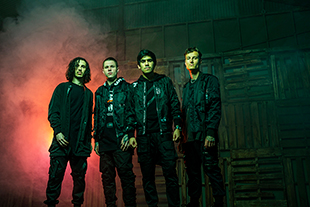