There is a distinct nod to her debut 'First Love', in terms of the storytelling that first impressed her lyrical and emotional dexterity upon so many. But on 'Second Love', Emma-Lee Moss delves into the chambers of a human heart ever-connected to the glare of a nearby screen. This is an album imbued with modern sounds, a nod to new eras, while maintaining the human warmth always associated with an ETG album.
The songs are full of emotion and questioning, with the chatter of friends and collaborators "coded" into the sonic landscape.

Opener 'Swimming Pool' - taken from this year's critically acclaimed 'S' EP - set the tone. Sketched out in Asian cities during a tour, and competed in a North London studio in the summer of 2012, its undulating grace became a sound Emma spent "three years trying to chase." These tender, glacial arrangements lead 'Second Love''s exploration through a new world, filtered through technology.

"For a long time, I thought the album would be about technology and the future, so I wrote a lot of songs 'about' stuff - like 'Swimming Pool' or 'Solar Panels' or about the magazines in 'Hyperlink'," says Emma. "But this didn't feel right. It was only when I started using these things to write about love that everything came together."

Like 'Dance w. Me', a sombre and sensitive ode to the complexities of love - "You can't exist without fighting me. Oh, I respect my enemy," Emmy sings, backed by the sampled voices of her LA housemates, while producer Dave McCracken, and musician friends Beth Jeans Houghton and Kristen McGarrity talk in the background.

Despite recording in tiny snatches, burrowing herself away in friend's bedrooms, borrowed studios and hotel rooms - "If I had to write down the locations of every recording session the credits would have around 30 people's houses in it", says Emma - 'Second Love'' remains a resolute whole, a delicate balance of songs and sounds that mirror the personal discoveries she made while making the album.

"In 2013, in LA, I was optimistic about the world changing and rapidly advancing, but over time the optimism gave way to something more complex and fearful. Technology and ideas which seemed entirely positive now feel equally as dangerous," Emma muses.

Emma's own life path - a move from London to Los Angeles then to New York - brought new perspectives. "Each time I was introduced to a new city, I got really quiet and observant. I'd be on a rooftop or in some weird LA backyard party, and someone would tell me something, and that sense of spontaneous connection would find its way into a song later." While trying to raise money for 'Second Love', Emma worked as a journalist, interviewing artists like King Krule, Dam Funk, Caroline Polachek, and Kele Okerere, and writing about culture for the Guardian and Vice - experiences which lent a new openness to her music.

"I've always felt that records are supposed to be 'records' of your life when you made them," she continues. "The entire album from 'Swimming Pool' to the final mix took around three years, and in this time my life progressed in previously unimaginable ways. I lived in three cities, I was single, I fell in love, made friends, new life came into my family and I found out what it is to be a stranger and to begin again."

With fitting synchronicity, Emma progressed from writing and recording guitar and vocals to programming and engineering. Advances in sound are balanced against classic songwriting, with each song's core left to breathe amidst a glistening whirr of spiralling layers of sound and voices.

Acoustic guitars step into harmonies like dappled sunlight on 'Algorithm', distant sirens flicker and synthesisers echo as we fall into lovestruck bio-mechanic balladry. "It's about searching for meaning in the noise," says Emma, "It encapsulates the feeling behind the whole album."

Elsewhere, the sadness swept through 'Constantly' bubbles with minimal grace before gliding into a crystalline chorus, as bright as the laptop screen that lights a depressed friend's eyes. "Your iris is a universe, your laptop it is glowing, and you say, this world comes in waves, constantly," she sings.

"Constantly is inspired by Doretta Lau's book collection about Millennials trying to make it in big cities, and partly by my own experience of trying to find my place in New York," says Emma. "I was thinking of these glittering cities, alive with their own myths, and all of us scrabbling around trying to reach for them. I don't need to tell you that the world can be a fucked up and scary place, especially for young people who are living in the future while trying to figure out if they have a future of their own." How the future connects us, be it a constant reminder of our own mortality or a provocative and powerful celebration of human endurance, is at the core of Emmy The Great's ''Second Love'.'

"In all the uncertainty," Emmy concludes, "I couldn't say for sure whether this is Utopia or Dystopia or something in between, but for some reason it only made me more certain of one thing: that, wherever we're heading, we're going to need music, and we're going to need love.
'Second Love' not only helped me reach this conclusion, it led me to almost every good thing that has happened to me in the last three years."

"Performing as Emmy the Great, Emma-Lee Moss makes music not unlike the hushed, intense conversations that can spring up between strangers at a party. From her intimate lyrical intricacies to the careful way she plays guitar, Moss' gaze is unbroken, her vulnerability utter and her attention to detail unwavering." - NPR

"[Swimming Pool] is an exemplar of how Moss' new experimentations can yield ideal results-tranquil and ruminative, yet also able to take a compelling turn with metronomic beats and baritone backing vocals by Wild Beasts' Tom Fleming. - Pitchfork

"The songs are foundationally solid enough in their swaying rhythms and sublime melodies that they don't need twists to keep them interesting, but the care Emmy puts into the album's crevices makes it one of the fullest-sounding and fullest-feeling singer/songwriter LPs of early 2016. - SPIN 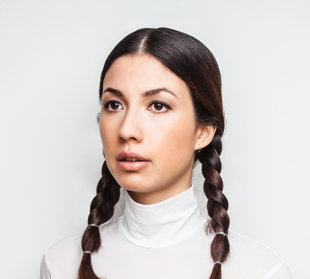