By exploring the different nuances that rock music allows and expanding from the emo template to hip-hop and beyond, musician, producer, and songwriter Ben Friars-Funkhouser has discov-ered the middle ground of genre-bending production. With his musical project fish narc, Friars-Funkhouser has helped popularize the application of live guitar playing onto the traditional trap-beat format.

Initially receiving his mother’s guitar when he was 12 years old, fish narc quickly cut his teeth in the local punk scenes of Washington State as both a vocalist and guitarist. It was this involve-ment in Seattle’s local DIY scenes that led fish narc to become a booking agent for Thraxxhouse, an experimental music collective of visual artists, designers, producers, rappers, and singers.

Although he was creating techno on an early version of Ableton, fish narc had no intentions of producing hip-hop. However, his whole perspective changed in 2014 when Lil Tracy discovered piano loops on fish narc’s computer and sang over them. Attracted to this avant-garde approach to rap music, fish narc began to work with Thraxxhouse artists. At this time, the collective Goth-BoiClique existed within Thraxxhouse but later on emerged into its own right.

It was in 2015 when Friar-Funkhouser seriously began to produce extensively for other mem-bers of GothBoiClique, including Lil Tracy, Horse Head, Wicca Phase Springs Eternal, Mackned, Cold Hart, and the late Lil Peep. It was during this transformative time period when fish narc sole-ly produced the 2017 Goth Angel Sinner EP with Lil Peep, which is currently slated for posthu-mous release.

The following year, fish narc produced both Brennan Savage’s Garbage and Drowning EPs, as well as collaboratively producings Wicca Phase’s Spider Web EP alongside Clams Casino. On top of working with fellow GothBoiClique members, fish narc has also produced for artists like Smokepurrp, Smrtdeath, Zubin, and many more. With a prolific amount of projects under his belt, fish narc is set to release his debut LP mid-2020. 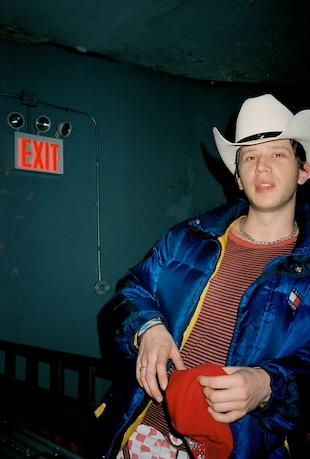