Formed on the cusp of a global pandemic, Dublin’s newest alternative addition, Gurriers, embody the emerging Irish genres of post-punk, noise rock and shoegaze. Made up of five best friends, roommates and co-workers Dan Hoff, Emmet White, Ben O’Neill, Mark MacCormack and Pierce Callaghan, each louder than the last.

Individually, playing music while growing up is the common factor that gives Gurriers their edge. With a new year ahead, all focus is on menacing releases and equally turbulent live performances.  For two years Gurriers have been developing their addictive and dangerous sound which has so far culminated in two singles, a headline slot at The Workmans and opening slots Goat Girl and Enola Gay.

Approachable was created in their first rehearsal session, sparking an instant coherence in the band that would prove to be their strongest attribute.

Gurriers’ live shows are an experience, although rolling lockdowns have stunted live performances, it has only made them a hungrier, vicious live force, as they spent those lockdowns in constant rehearsal.

When it comes to listening to Gurriers, their current singles; Top Of The Bill and Approachable demand attention and volume.

The band describe their live performance experiences as being unruly, loud and turbulent. Speaking about performing live, lead singer Dan is eager to get back on stage:

“I definitely had withdrawal symptoms after not playing for a while. I love everything about it, meeting new people, being there in the moment, what other job would give you this?”

Expanding on this, lead guitarist Mark describes their live sound as “hypnotic” which extends to their recorded material.  Following a noisy entrance onto the live scene, Gurriers gained attention of Irish Times journalist, Tony Clayton-Lea who described the group as being “Raw as a butcher’s cut, and just as fresh.” 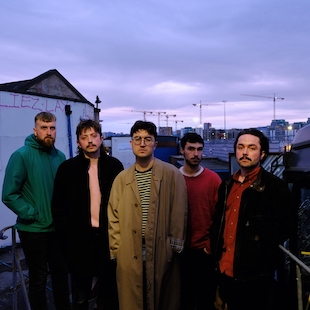