Hayden Kramer, better known as Herobust, is a Bass Music Producer from Atlanta, GA. Most notable releases include 'Vertebreaker' and 'Skurt Reynolds' via Mad Decent. Originally inspired by Dirty South Hip-Hop, Herobust found himself producing Downtempo Hip-Hop beats at the beginning. Many of his early tracks are seemingly inspired by artists like OUTKAST, Squarepusher, and The Prodigy. As Herobust gained popularity, his scale of production grew into the powerful sound design that we hear today. He honed his craft by remixing other people's tracks, as well as working on his own sound design that brought about his signature BUSTED sound.

His latest release -- 'Vertebreaker' EP (Mad Decent 2017) caught the community by surprise when the lead single and title track -- 'Dirt Heater Tea' and 'Vertebreaker' premiered atop the Soundcloud Dubstep / Trap charts and then went on to surpass 2mil streams across Soundcloud and Spotify. Herobust recently wrapped the 'Vertebreaker World Tour' where the response was incredible for the new tunes and many new fans have been made in countries like China, India, Australia and Canada. He will also be performing at EDC Las Vegas, Bonnaroo, Shambhala and many more festivals this summer! Herobust seems not to be constrained by genre, and has proven that he is pushing forward into uncharted musical territory with the support of Diplo, Skrillex, Datsik, Flosstradamus, and Marshmello. He has also been commissioned by the likes of Third Eye Blind, D.R.A.M, and Knife Party for official remixes.
And after much success, Herobust will be releasing his first music video for 'Move Mint' in the coming months.

Herobust has been featured on iHeartRadio, Sirius XM, Billboard, Rolling Stone, MTV and many others. 'Vertebreaker' debuted at #21 on Billboard Electronic Charts, and Herobust has recently surpassed 500k+ followers across his social platforms.

YourEDM includes Herobust in their 'Top 5 Best Trap Artists 2016' and Insomniac credits him as 'one of the hottest voices in the trap-dance movement' He was also awarded the iHeartRadio award 'Best Remix of a Rap song' for his BUSTED remix of 'Broccoli' (Feat. L'il Yachty). With much success under his belt already, it's clear that Herobust has no plans for slowing down. 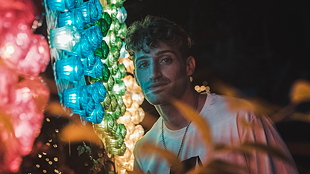