Hinds' breakout debut album 'Leave Me Alone' was an album of party anthems drenched in metaphors. With their forthcoming sophomore record 'I Don't Run', it's time to cut straight to the chase. Some might expect them to write songs about being happy, young and carefree - "but we're not satisfied with that," explains guitarist Ana Perrote. "On this album the struggles are clear. We want to be brave." 'I Don't Run' is Hinds' return with an honest reflection on a period that changed their lives beyond their wildest imaginations. Since 2014, the band has been on a globe-trotting run.
They've never professed to being error-free, and they're all the more brazen for it having survived everything that's been thrown at them: world tours, sold-out crowds, harsh criticism, sexism, and all that lies inbetween. Hinds have become better musicians, tighter friends and tougher characters.

A recap of their whirlwind story... Two women from Madrid meet through then-boyfriends who were musicians. They believed that music was for boys to play and girls to watch, until they abandoned their boyfriends, went on a road trip, brought a guitar and started writing. Eventually they find two other women and graduate from being a 2014 Bandcamp act to a signed band who tour relentlessly, work harder than their male counterparts, make friends wherever they go, record a critically acclaimed debut LP, and become one of the biggest indie bands to ever emerge from Spain. With this second even more accomplished LP they continue their quest to own their narrative - one of sisters doing it for themselves.

On 'The Club', Carlotta Cosials opens the record singing "I wanna show you it's cool to grow up". It's drenched in bolder guitar licks, a meatier rhythm section and a fuller, catchier, dirtier and more ambitious re-entry into the spectrum. "I wanna prove that your clock doesn't stop at the club." 'New For You' features Cosials practically screaming "Sometimes I see myself and I can't stand my show!" before a pining chorus that sees her promise to be her best self for a lover (or perhaps for herself, or even her band of sisters).
Beneath the breezy melodies lies a damning self-criticism; a side to Hinds we haven't seen. They may play as dangerously as any male DIY act, but their reactions to sudden notoriety are imbued with sensitivity; a result perhaps of their inherent femininity, as opposed to a need to push their egos.

'Finally Floating' revolves around a dance floor-ready beat as Cosials and Perrote exchange vocals like duelling bulls. "I'm feeling great 'till I'm laying in bed and all these random melodies sound again," they shriek while likening their experience to being trapped in suspended reality. Sleeping, dreaming and night-time are repeated motifs throughout. They explain that during their manic recent past those little hours of solitude were the truest moments they had. The record shows a bigger, better, faster, funnier, more dexterous Hinds.
They sound like a band fighting for their place, a band unwilling to rely upon their successes, a band who have just begun to prove themselves to their detractors and their many fans.

"I have a question for you," says Cosials sheepishly. "Do you think we're showing a very dark side of us with this album?" Since Hinds emerged the world has grown increasingly dark. The need for musical hedonism and the sanctity of a communal live space has increased. Hinds gigs are the physical embodiment of "fuck it, let's dance." Their lack of pretense remains at the fore of their schtick as Cosials, Perrote, Ade Martin (bass) and Amber Grimbergen (drums) prepare themselves for the madhouse again. This time they want you to know that they're not intimidated by rock'n'roll tropes. While sex, drugs and rock'n'roll is part of Hinds' life, it's not something that defines their direction. They know how much they can handle; Hinds play hard but they work even harder. "We realized it's awesome to go against rock'n'roll rules," says Cosials. "Everyone says 'live fast, die young'. But they're trying to run away or chase something. 'I Don't Run' is the opposite. We're cool with the velocity of this world."

The velocity, however, hasn't always made for plain sailing. "We went crazy," admits Cosials of touring. "It all became too hard for a second." Perrote adds that the band's need to play every city who wanted to host them was testing. "It's hard to stop thinking about being tired, sick and sad, to remember that you're onstage trying to give the best you can but not always the best you wish." As a result they learned how to step outside of themselves, to depend on their sense of community. "You stop caring about the little things," offers Martin. "If Carlotta smells bad, I don't care anymore." They all giggle.

The unity of Hinds' gang is at odds with the rote tales of band in-fighting and clashes of personality. "We're girls," says Cosials. "We're crazy in a different way." It's an aspirational model, a shining example of women lifting each other up at their most vulnerable. Facing each other with nowhere to hide has inspired a new emotional openness in their songwriting. Once they got off the road in April 2017 there was a period of transition. They were by each other's sides back in Madrid. Having blocked time at the beginning of 2017 for writing, they had ideas to embellish upon. Giving 'I Don't Run' their complete focus, they invited new collaborators out to join them: producer Gordon Raphael [The Strokes, Regina Spektor, Sky Cries Mary] - an early Hinds fan - and Grammy winning engineer Shawn Everett [Alabama Shakes, The War On Drugs, Perfume Genius, John Legend]. "We were looking for the same feeling and the same places," says Perrote on the decision to stay in Madrid, even debunking to Cosials' mother's house when they had writers' block to recreate the magic of their earliest writing sessions.

Raphael was the first non-Spanish speaker they've ever worked with. As a band determined to get you to focus on their lyrics more, Raphael encouraged them to refine their pronunciation. "He wanted to keep our horrible accents," laughs Cosials. The girls insisted upon co-producing; a key element to their DIY or die attitude. "We were free to do whatever we wanted," says Perrote. Everett was crucial in capturing the atmosphere and spunk of every track by asking the band to properly visualise each one with images they'd bring to the studio. The starkest overall difference is in ability and intention. "If you're looking for mistakes Hinds is your band," says Cosials.
"We make mistakes but we really are proud of what we have and we wanna prove the doubters wrong."

After everything they've overcome, you might think a band like Hinds would have second album jitters but think again.
Hinds are chomping at the bit and with defiant confidence. "We loved making this album," says Perrote. "We knew what we wanted and we have what we wanted. This is a new start for us and we're fucking ready." 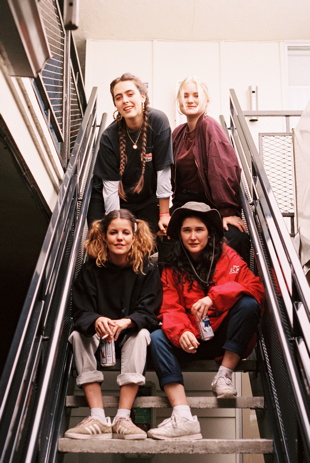