Jamie Lenman made his way up through the UK underground scene as the singer, guitarist and songwriter of noughties band Reuben, rubbing shoulders and playing shows with stablemates Biffy Clyro and Frank Turner's Million Dead. After ten years of touring and three acclaimed records, the band imploded and Lenman swore off music, only to return five years later with a monumental double album of half-folk-half-thrash, establishing himself as both a creative force in his own right and a powerful live presence.

In 2017 Lenman signed to Big Scary Monsters and defined his sound even further with the highly praised 'Devolver', whilst streamlining his live act to simply himself and a drummer, playing bass and guitar simultaneously for a razor sharp attack. After a slew of dates in the UK and Europe, continued support from Radio One and even a chart-topping vinyl single, Lenman brings his dynamite live show to Glastonbury 2019 with a mix of solo tracks, tunes from the band days and fresh cuts from his new album 'Shuffle'. 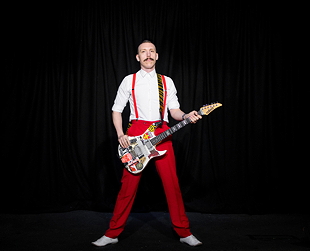