Caustic, cerebral and wilfully unconventional, LICE have spent their early years flirting with mainstream acclaim whilst remaining contemporary British punk's constant outsiders. While their fevered, left - field compositions and dense, satirically - ambiguous lyricism might be a tight - fit for traditional punk fans, they have cultivated a devoted following amongst seekers of more abrasive, bold and transgressive guitar music.

LICE emerged in 2016 from Bristol's vital avant - garde scene, on the periphery of a heavily - publicised new wave in British post - punk. The group quickly rose to prominence with a run of incendiary DIY headline shows(including a gig in a 13th century crypt)and support slots for The Fall and The Fat White Family. In 2017 they became Big Score Records' first release with stand alone single 'The Human Parasite', receiving mainstream press attention and radio play from 6 Music, Radio 1 and Beats 1. This led to summer festival appearances at Green Man and Glastonbury, along with a UK co - headline tour with YOWL.

In 2018, the band's arch - advocates IDLES, who had invited LICE to support them on the 'Brutalism' and 'Unity' tours, released the group's "early - years" collection on their label Balley Records. This Double EP, 'It All Worked Out Great Vol.1 + 2', won acclaim from the likes of The Guardian, The Quietus and Loud and Quiet, who declared them "the most exciting, inspiring and genuinely deranged new guitar band in the country".

"Levels above punk contemporaries" - The Quietus

"The most exciting, inspiring and genuinely deranged new guitar band in the country" - Loud and Quiet

"LICE are off the fucking wall... they are well and truly one of the most exciting things to happen in the history of Western art." - Vapour Trail

"LICE are amongst the most uncompromising artists to have hit the Bristol scene in recent years. For established labels and dedicated gig - goers in the city, they've seemingly arrived from the middle of nowhere." - So Young

"LICE are a band that need to be written about... They've got both the talent and dangerous nature to create something truly unique." - The Know

"...if you ever get the joy of seeing them live, they are definitely not pretenders - they are a formidable, formidable band" - Joe Talbot (IDLES) on Radio 6 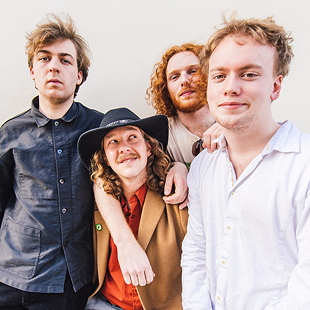