ERRØR BØY is his debut album on Epitaph, a fully realized studio effort that amplifies the flawless songwriting he’d been creating on his own. The album was born with scars of addiction, toxic relationships, and everything else under the sun. The album is the synthesis of his best efforts and worst instincts. “ERRØR BØY is about how I’ve struggled with addiction, I've struggled with giving myself the credit I deserve, with loving myself, with loving the ones that love me, with not pushing people away, with not running away from people who are completely there for me,” Lotus says. That manifests in songs of romance and all its perils.

It’s clear listening to ERRØR BØY that Lotus is the new voice and face of pop-punk, ready to take centre stage as the genre takes over the world this summer. Lotus worked closely on the album with a legend in the world of pop-punk and emo, John Feldmann of Goldfinger, who has produced for groups such as Story of the Year, The Used, Good Charlotte, Panic! At the Disco, All Time Low, and blink-182. Two tracks include another legend, Travis Barker on drums. Lil Aaron, a close collaborator, is featured, too. And while these guests and producers certainly beefed up his sound, they didn’t redefine it. So, while ERRØR BØY may be the first album-length look at Lil Lotus, he’s always been headed in the direction of this massive debut. 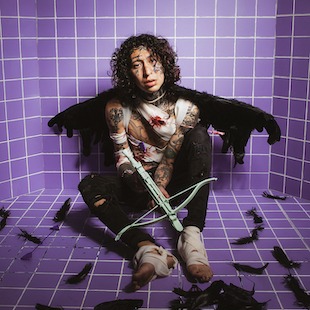