LOLAWOLF is a trio from New York fronted by Zoë Kravitz. The band includes Jimmy Giannopoulos and James Levy from Reputante.

The band's debut LP 'Calm Down' is out worldwide (ex-UK) on Innit Recordings via KLS and via Create/Control in AU/NZ. The record will be released November 17th in the UK.

Produced by Jimmy Giannopoulos and recorded earlier this year in the Bahamas and LA, the album finds the band adding hip-hop and tribal elements to their sound.

"LOLAWOLF just made the most unpredictable R&B album of the year... the warped-pop album is full of sudden swerves and turns; experimental late-night songs that riff on the music they grew up hearing and loving on the radio... [e]ven though Zoë doesn't have her sights set on stardom, it's just a matter of time until human reappropriators Rihanna and Katy Perry jack her new aesthetic"
NOISEY

"Full of smoky vibes and lyrical asides, it digs deep into the 3am feelings and a broader pallet of sounds."
FADER 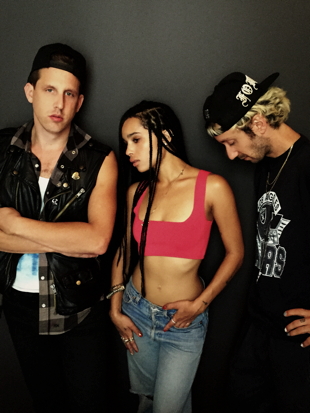