Love Sept. is led by four MCs each making a name in their own distinct lanes; BVDLVD has been hitting global recognition with his screamo trap and wild video edits, Hen$haw digs into London's DNA to spit drill and garage flavoured bars, 16 year old KXZARI filters melancholic melodies and a languid stoners flow through soundcloud rap aesthetics, while wildcard V. Ri has dropped everything from woozy bedroom pop to trap neck-snappers. Having met playing shows on London's underground rap circuit, they recognised a unique shared love of counter-culture, and joined forces to evolve into a fully formed [dysfunctional] family with the addition of DJ/ artist Jai, producers goodbyechase and LV, Jack Whitfield and Sara Shots on visual production, and representing the international wing, dubstep / trap producer EB Wayside, currently joining the group chat from Kenya. With this 10 strong collective they've turned into a self-contained powerhouse; fiercely independent they write, record, mix and engineer all their own music, then shoot and edit their own videos.

Now signed to trailblazing indie label Moves Recordings (Skengdo x AM, Afro B, Naira Marley, etc) they're set to drop solo projects and group cuts close to weekly throughout 2020, ranging from trollish banter to serious meditations on depression, veering in style from brutal distorted trap to broken-hearted guitar ballads, all of it crackling with raw energy...

Love Sept are here to represent the left behind kids of Britain and beyond, laughing in the darkness as they head over the edge. 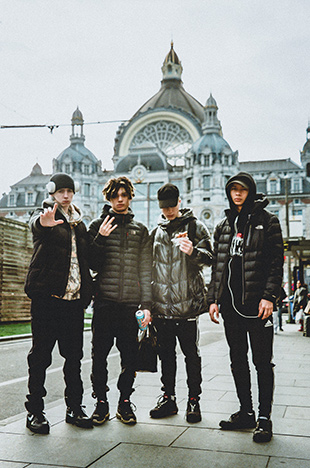