When Malena Zavala sings, time seems to stand still. Her haunting voice is hypnotic, her sensual songs like spells that sweep you out of the everyday and off to somewhere exotic. As a baby, Malena sang herself to sleep. As a musician, she may have magical powers.

'Aliso', her debut album, both drifts like a dream and packs a powerful punch. Entirely written, played and produced by Malena, its ten tracks owe a debt to Beach House, Brian Eno, Tame Impala, Cuban folk musician Silvio Rodriguez and an addictive Argentinean tea called Yerba Mate that fuelled its recording. Its songs are as much about capturing emotions as they are about telling tales. Its spectral beauty is bewitching.

Having sung since her teens, but never previously written or produced, Malena took a freewheeling approach to composing. She made the album, mostly in her parents' garage, as an experiment more than an introduction, intending to upload it to Soundcloud to see if anyone noticed. When a label snapped her up, she was shocked. When ecstatic reviews of her first two singles, both released late last summer, took her Top 10 on Hype Machine twice, she finally conceded that music had become her career.

Born in northern Argentina but brought up in Britain from the age of three thanks to her family's Italian passports and an Argentinean economy in crisis, Malena was raised to pursue whatever made her happy. As a child, her biggest influence was her music-mad architect dad's record collection.

"He played me and my brothers everything from Supertramp to Bueno Vista Social Club," she says. "As a child I decided that I wanted to be Britney Spears. I'd spend hours dancing in the kitchen, pretending to be a pop star." Malena's talent for singing was already obvious and, having studied musical theatre from the age of eleven, she progressed to a college that focused on music and acting.

"At school there were lots of different bands - jazz, funk, rock - and I was in all of them," she recalls. "At the end-of-year shows, I sang more than anyone else - covers of Lissie, Joni Mitchell and No Doubt. But I also realised that I wasn't right for musical theatre. You have to be super-belty and it was obvious that my voice is better quiet, fragile and minimalist."

Inspired by her beloved brother Lucas, who had discovered Hendrix and the Chili Peppers, in her mid-teens Malena took up guitar, but struggled to make the instrument work with her delicate voice. For help, she enrolled at Guilford's Academy Of Contemporary Music for vocals, but changed course when she was asked to sing a Girls Aloud cover.

"It wasn't right for me, so I switched to music business instead," she says. "I wanted to find my own sound, in my own time. I took the vocal techniques they'd taught me and experimented alone, often in the shower, seeing what strange sounds I could make. I tried to copy Latin beats and rhythms and make notes last longer even after I'd stopped singing."

Malena's big break almost came when Lucas, five years her senior, asked her to front his band. Her voice and his songs saw Oh So Quiet briefly hyped on the London indie scene. They played weekly gigs and got label interest, but when they were about to record an album, having spent a year building their own studio, Lucas fell in love and left for California.

Malena followed him over to continue work on their songs, staying at his home in Aliso Viejo. One day, sitting in his living room, she wrote a song entirely on her own, 'I Never Said It', which closes the album. "I'd brought a portable recorder with me and when the tune came in to my head, I had to get it out," Malena says. "By the time I left, I had four songs - the first I'd ever written."

Back in London, in the garage studio she had built with Lucas, Malena taught herself production. Lucas had introduced her to Beach House, Feist, Devendra Banhart and Cat Power, but it was discovering Tame Impala that had the biggest impact.

"I became obsessed with how he writes and records everything alone," says Malena. "How he creates his own world inside each song."

"Making the album was a massive learning experience. I didn't set out with any sound in mind - my biggest concern was creating a vibe. I turned what was in my head in to music in the only way I could."
Hooked on Yerba Mate - an Argentinean loose-leaf tea drunk through a straw - Malena spent just one day writing each song, then a week playing around with the production.

"Yerba Mate is great for concentration, but drink too much and you end up not sleeping," she says. "In my caffeinedriven mind, sounds would come to me and I'd try to replicate them on guitar, then improvise with my voice." The spellbinding 'Should I Try', Malena's first release last August, is about self-doubt and fear of the future.

"It was me wondering if anyone would like my music," laughs Malena. "If this hadn't worked, I might have been a failed musician at 45, still singing in bars, unable to feed my kids. But because of my parents, I'll always give things a go. You can't fear failure if you don't even try."

A month later, Malena proved she was no one-song wonder when 'If It Goes' hypnotised critics with its gorgeous guitar and a chorus that could have slunk in from outer space. The trippy, accompanying video, made by Malena, caused almost as much of a stir.

"I've been making videos for years, first as a hobby, then more seriously," says Malena. "Making music videos was my back-up plan. That one is five years' worth of film photos that I synched up to video and fucked with. It took a couple of weeks to make.
I also made the video for 'If It Goes' and I'm making two more at the moment." 'If It Goes' took Malena just five minutes to write and was inspired by her birthplace.

"It's partly about my connection to my heritage through my mother," she says, "but also the fear of losing my culture by being in a different country."

The drums on the song, as elsewhere on 'Aliso', were sourced from a single recording Malena made of a South American drum owned by her brother.

"The drum is called a Bombo," she explains. "It has a very deep sound and you use the rim. Before Lucas left, I recorded myself on it for fun. I sampled that, programmed it and used it all over the album."

'Aliso' also features some field recordings. The running water on the celestial, winter weather-themed 'A Vision That's Changed' is torrential rain; the Spanish crowd on the intro was recorded on holiday in Malaga. Inspirations are sometimes obvious - the beautiful 'Broken By Two' recounts a falling out that resulted from a mistranslation; sometimes not - 'Moon Song' documents loneliness in London. The instrumental title track is Malena's tribute to Brian Eno, while 'Could You Stay' is an attempt to write a jazz song that went wrong and ended up with a dreamy West Coast vibe instead.

The beauty of 'Aliso' - and the reason it sounds like no other album - is because its songs were recorded as they were written - with no boundaries, no set destination, and no rules in place to break. Oh, and maybe because of those magical powers. 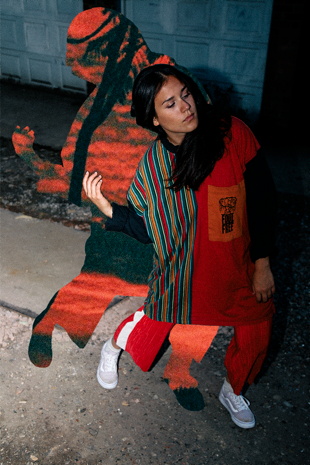